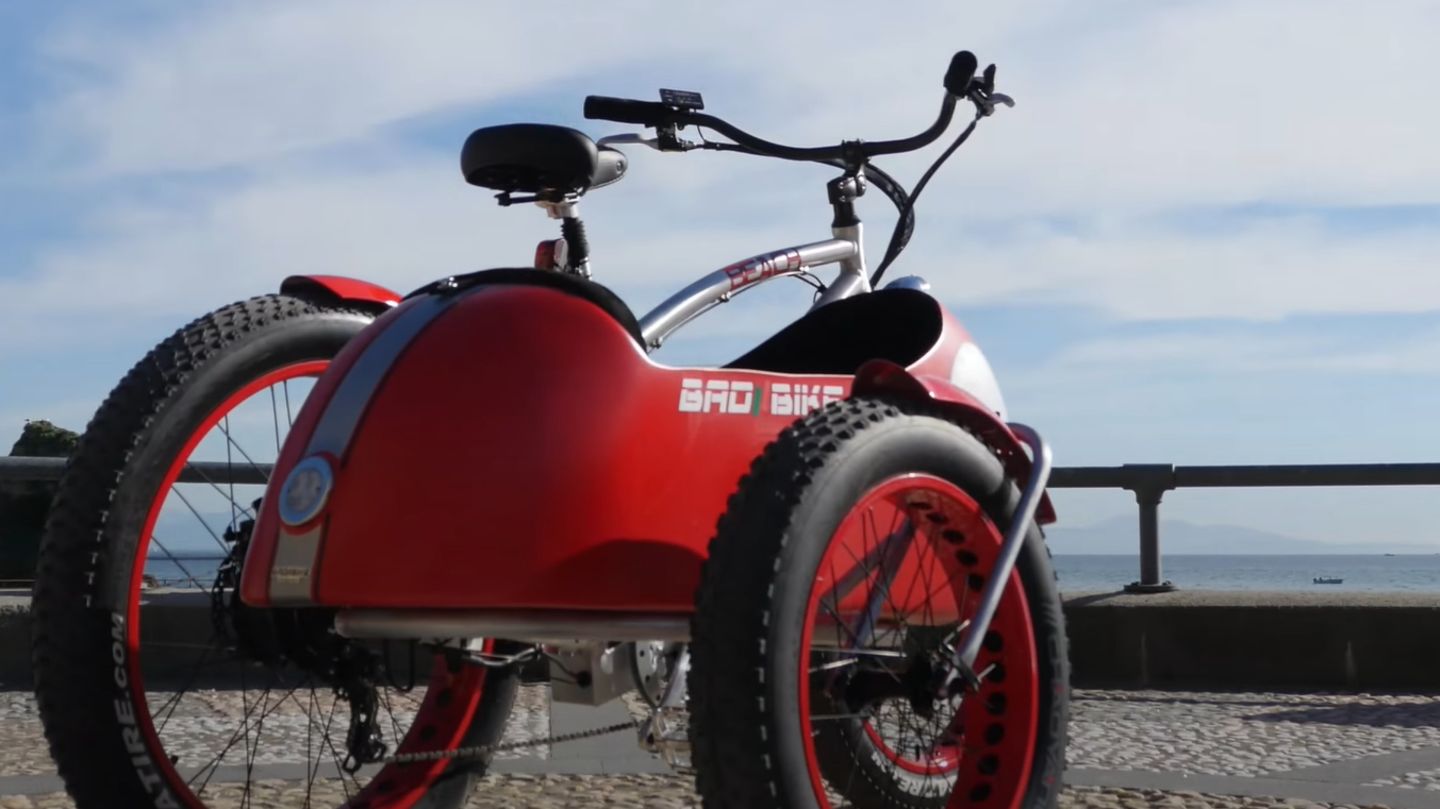 There is hardly a more stylish way to transport loads by bike. Bad Bike builds a bike with a sidecar. The team is technically not top notch, but it looks great.

An e-bike with a sidecar – that looks much cooler than a cargo bike or a trailer. Especially when the team is ordered in military olive. The Italian manufacturer Bad Bike specializes in fat bikes – i.e. bikes with wide tires – and stylish frames. Such bikes are something for customers who are looking for an eye-catcher that will attract attention. They are less suitable for sporty drivers.

In addition to the standard model in the typical cruiser look, Bad Bike has a special feature: a bike with a sidecar. It looks like a miniature version of a motorcycle team – in matt olive it is reminiscent of the models from the Second World War. In other colors to the 1950s, when such teams had their heyday.

In addition to the space on the saddle, the bike has a sidecar in which loads, a small child or a dog can be taken along. An adult does not fit in the stroller and would also be too heavy. As with all these mini-series, a motor in the rear wheel hub is used for the drive. In this way, the frame can be designed more freely and it does not have to have the accuracy of fit that is necessary to accommodate a mid-mounted motor.

The disadvantage of the Chinese Bafang engine is the comparatively low torque of only 40 Newton meters. This is not an engine that is predestined for a heavy cargo bike. Such concepts work better in markets like the USA, where the legal regulations are different than in the EU countries. Approximately a 750 watt motor can be installed. In the EU, the power is limited to 250 watts if the e-bike is to be considered a pedelec and wants to use cycle paths.

Chic – but not a technical masterpiece

But even with 250 watts of power and 40 Newton meters of torque, the wheel will be able to be moved. The engine will only run out of breath in areas with longer and steep inclines. The main disadvantage of the chic concept is not the lack of torque, but the width. Here the “trailer” doesn’t drive behind the bike, but next to it. It gets correspondingly narrow on the bike path. In Germany, metal bars are also often built across the bike path in front of road crossings to slow down cyclists. Such obstacles should not be able to be passed at all. The battery with 468Wh is just below the standard of 500Wh.

The sidecar is not rigidly connected, but springs in the suspension on the wheel – so you can still lean a little into the curve. Judging from the video recordings, the sidecar can be assembled and disassembled. However, this involves more effort than coupling a wheeled trailer. So you can’t decide from day to day whether you want to have the sidecar with you.

The 250 watt version costs 3599 euros. You basically pay the money for the look – the bike without a sidecar costs about half as much.

In Lyon, Jadot presents its program for an “Ecological Republic”

Who are the 15 ‘Spaniards’ from Equatorial Guinea?