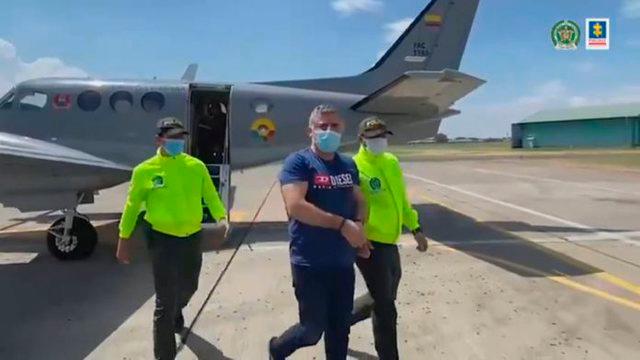 The pockets of the corrupt who work in Colombian piers and airports are being filled with banknotes paid by gangsters from the Balkans, whose businesses in our country grow along with the cocaine that floods Europe.

In the last 19 months, four police officers, a former deputy and an air traffic controller have been prosecuted by the Prosecutor’s Office, allegedly linked to transnational drug export networks. The most recent case was discovered in Santa Marta, whose port was used as a platform to transport drugs to Romania, Lithuania and neighboring nations.

According to the investigation, the patrolmen Camilo Bonilla Santos, Rubén Rojas Aguirre and Jorge Vanegas Villa would have colluded so that the criminals entered the loading area to contaminate the textile and fruit containers with the drug.

They were captured last March, along with three civilians, who apparently were in charge of transporting the merchandise from the collection sites.

In September 2020, a similar situation was detected at the Rafael Núñez airport in Cartagena and in the port area of ​​the same city. In these places, a network operated that exported cocaine to Slovenia and other European countries, in association with local groups such as the Clan del Golfo and “la Oficina”.

The judicial file indicated that one of the contacts of the organization was, presumably, the subintendent Carlos Palacio Castillo, who served at the air terminal. The authorities accused him of coordinating maneuvers so that the narcotics passed the controls without being detected; In 2018 he was transferred to Medellín, but from here, it seems, he continued to orchestrate the plot.

Paulo Williams Blanquicet, a former deputy from San Andrés, who supposedly managed the logistics for maritime and air transport, also participated in it.

Both were arrested along with seven other people.

The Prosecutor’s Office is also targeting several air traffic controllers and members of the security personnel at the Alfonso Bonilla Aragón international airport in Palmira (Valle), who apparently received bribes to facilitate the takeoff of charter flights loaded with drugs.

The one who paid the bribes was Agim Cerma, an Albanian trafficker who bought the cocaine produced in Cauca from the Farc dissidents, to take it out through the Valluno airport and the Caribbean ports.

His cell was dismantled in July of last year, when the Police and the DEA arrested him in Montería, for extradition purposes. Four Colombians fell with him, including Jairo Cardona López, who worked as an air traffic controller for the Civil Aeronautics in Cali.

The Balkan Cartel is a generic name to group traffickers from the Balkan Peninsula, in Central Europe.

It is not a single organization, but a set of criminal groups, some enemies of each other, made up of drug traffickers and former soldiers from the former Yugoslavia. That is why they are also called “the Yugomafia”.

According to data from the Police and international agencies, in Colombia they began to operate in a “timid” manner in the first decade of the 21st century, almost always in association with Italian drug traffickers.

In the last five years they have gained strength, sending their delegates to directly negotiate the production, transport and shipment of cocaine. They buy from the Farian dissidents, the ELN, the Clan del Golfo, “the Office”, the Drug Trafficking Board of Directors and independent networks.

These foreigners, who are usually from Serbia, Albania, Croatia or Bosnia, settle in capitals such as Medellín, Bogotá, Cali, Barranquilla and Cartagena, where they pose as investors, while coordinating deals with alkaloids produced in Norte de Santander, Cauca, Nariño, Putumayo, Valley and Meta. “To get the drug out, they prefer to hire charter flights at airports in the capitals, or camouflage it in containers that leave the ports of Santa Marta, Barranquilla and Cartagena,” a police anti-narcotics agent told this newspaper.

One of those “investors”, whose facade was to be the alleged heir to a hotel chain in the Netherlands, was the Montenegrin Armus Ivan, arrested in April 2021 in Cartagena, where he had lived for three years. They seized a luxury sailboat with half a ton of heated cocaine.

Operations by three cartels have been detected in Colombia: the Saric Group, the Amerika Group and the Keka Group.

The first is led by Darko Saric, a Montenegrin raised in Serbia, who since 2009 established alliances with “los Rastrojos” and later with the Clan del Golfo. They call him “the Pablo Escobar of the Balkans”, not only because of his ability to traffic tons of drugs, but also because of his network of corruption.

He was arrested for the second time on April 13, in Belgrade (Serbian capital), in an operation in which his lawyer and 12 policemen he had bought also fell.

The head of the Amerika Group is Mileta Miljanić, also arrested in February 2021, when the FBI raided her home in New York.

His plan to expand drug trafficking networks is associated with the millions of displaced persons from the Balkan War (1991-2001), a diaspora that spread throughout Europe and the United States. The Amerika Group recruited many of these exiles, securing contacts in dozens of countries, including Colombia.

The Keka Group is the newest sending emissaries to South America. Agim Cerma, the detainee in Montería, is apparently one of them.

The others were Serbs Dejan Stanimirovic and Sasa Spasic, murdered in 2020. On March 31 of that year, the former died, in Guamal (Meta), in a meeting with former paramilitary José Rivera Mendoza, which ended in a shootout; both lost their lives, as well as two police officers who came to attend to the emergency.

These are not the only bloodshed involving the Balkans.

On October 8, 2018, on the outskirts of Pereira, Miro Risvanovic, a Bosnian German nicknamed “Russian”, who had business with the Clan del Golfo, was killed in a truck. His girlfriend was a former Colombian Police patrolwoman.

And on March 19, 2019, in Medellín, Vladimir Vidakovic died. The hypothesis is that his enemies gave him a brutal overdose of narcotics. In the midst of delirium, the Serb ran away to a gas station, tried to ingest fuel to vomit the poison, and when the police arrived he suffered a panic attack. Minutes later he died in the intermediate unit of San Javier.

Who is behind the deaths of the Balkan drug traffickers? The authorities still do not have all the answers, the truth is that entering the competitive Colombian cocaine market has its price.

María Vélez de Berliner, adviser to the Pentagon and professor at the U. George Washington, told EL COLOMBIANO that in addition to the three Balkan groups mentioned, we must be careful with the expansion of the Ukrainian mafia, in particular with the Semyon faction Mogilevich.

For this capo, born in Ukraine and resident in Russia, the US government offers a US$5 million reward. He is 75 years old and has been trafficking drugs in Europe, Asia and America for three decades.

Due to the invasion of Russia, “there are five million Ukrainians displaced to Poland and other countries, including a growing number of refugees who use Venezuela, Colombia, Brazil, Panama and Mexico to seek asylum in the US. Drug trafficking is a crime economic need and not moral turpitude, and often takes advantage of homeless people or legal opportunities, “argued the expert.

And he added, without wishing to stigmatize: “Over time, this would be the condition of many exiled Ukrainians, and the narcos are ready to provide immediate, albeit illegal, ’employment’.”

This implies that Mogilevich’s organization could use the same strategy as Grupo Amerika with migrants.

It is an early warning for Colombia, where, according to Migration data, in the first quarter of 2022, 777 people arrived from Ukraine, a neighboring Balkan country (278 more than in the same period of 2021).

Some, according to Vélez de Berliner, could be exploited by these mafias thirsty for cocaine.

It was the year in which the Police discovered the first Balkan delegates in Colombia.

Three Balkan cartels do business with cocaine producers in Colombia. Corrupt officials are participating in these networks, facilitating the export of drugs.

The strange benefits of “eccentric exercise”, one of the fastest ways to improve your strength

Sally, an 8-month-old puppy, tears up €1,500 in banknotes: her master, Grégory, “takes leave” to go to the National Bank of Belgium