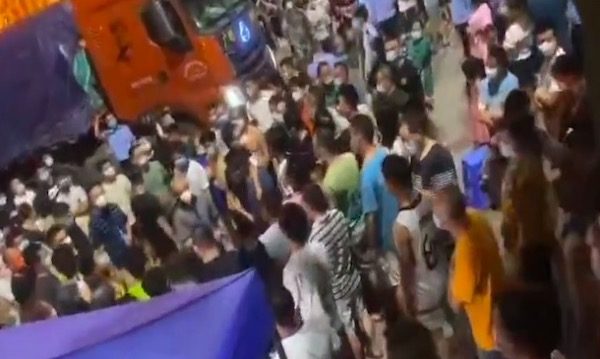 [The Epoch Times, September 13, 2022](The Epoch Times reporters Xiao Lusheng and Gu Xiaohua interviewed and reported)Dongxing City, GuangxiOn and off since February this yearlockdown, until now for more than half a year. However, on September 12, the city notified that,epidemicIt has not been completely eliminated, and strong measures will continue to be takenControl. The local people shouted that there is no need to prevent and control in that way, and the people have no way to survive.

“Guangxi Daily” reported on the 12th,DongxingThe press conference stated that the local community has basically achieved zero social status,epidemicOverall controllable, etc.However, it was also said that from September 6 to 15, the Dongxing Town area was further strengthened.Controlwork to prevent the spread of the virus.
Listen to the news:

(For more listening, please go to the “Listen to the Epoch” platform)
DongxingIn an interview with The Epoch Times on the 12th, a citizen said that too many things have happened in the past nine months this year. The main problem now is that the people of Dongxing have been quarantined at home, students can’t go to school, and many people do not have jobs. There was no one on the street.

The citizen disclosed that, during the nearly seven months of lockdown, the government only issued subsidized living materials once, three packs of snail powder, one barrel of oil, and one pack of rice per household, and later a subsidy of 60 yuan and one box of mooncakes per household.

The citizen escaped from Dongxing City at the end of August. “There are a lot of people who are being pulled away and quarantined. To exaggerate, almost half of them are pulled over, almost every day.” He said, “In the beginning, the streets were full of buses pulling people, but now they are generally required to be quarantined at home. “

Dongxing City is a county-level city hosted by Fangchenggang City in Guangxi. It borders Vietnam. Before the epidemic, there was a large flow of people at the port.

Students spend most of the semester at home

Zhou Tianyi (pseudonym), a high school student at Dongxing Middle School, told The Epoch Times reporter on the 12th that since February 24th and 25th this year, he started taking online classes at home when he was still in high school, and he did not return to school until June to close the loop. After staying in the dormitory for a month or two, I went to the hotel for isolation and then was sent home.

This time, it was originally scheduled to return to school in a closed loop on September 1, but it has been postponed due to the epidemic, and there is no specific return date until now. “The most serious community this time is Qixing Community. The water was cut off at noon on September 6, because there was a carrion in the water source.” Zhou Tianyi said.

Zhou Tianyi said that at that time, the water was cut off in the whole city. It stopped for 3 hours from 12 noon that day, but after that, everyone dared not drink the water, because it was corpse water, so every household stocked up with mineral water.

At that time, someone broke the news that the citizens of Dongxing were struggling to live. The local area was like a dead city. A Vietnamese stowaways died and no one collected the body. As a result, the body blocked the water pipe of the water plant, and the locals could not even drink water.

Zhou Tianyi said that during the closure of the city, they basically did not get any materials. “Before doing nucleic acid testing, I got two packs of traditional Chinese medicine, disinfectant and masks, and now I get a pack of Mid-Autumn Festival mooncakes. Then it’s gone. “

Xiaoying (pseudonym), a female middle school student in Dongxing Town, Dongxing City, also told the Epoch Times reporter on the 12th that the closure of the local area has been intermittent since the beginning of the year, and this time it began to be closed on September 3.

She said that when she was in school, nucleic acid tests were done every day, and students were not allowed to go to the classroom to review, but they were asked to take their books back to the dormitory for study, and they went to eat in batches at the meal order, one grade after another.

In June, there was another case in Xiaoying’s school, and all 2,000 people in the school were taken to isolation. “I didn’t have online classes in the hotel, so I went to bed every day. After the quarantine, I went home and stayed at home until now,” she said. “There is no freedom in staying at home. Every day is very empty, and I can’t go to work or go to school.”

“School closed, where did you get this virus?”

During the school closure, there were cases in the school, and high school student Zhou Tianyi questioned: “The school is closed, where did you get this virus?”

In April of this year, prisoners and prison guards in Dongxing Detention Center and Shengou Community also contracted the virus. Zhou Tianyi said that the strange thing is that the prisoners in the detention center did not come out to contact anyone, but all of them were infected. The official finally pushed the blame, saying that it was because of the water source.

“Insiders said that there were hundreds of cases at that time, and they reported them in batches, 50 or 60 a day, and finally reported them slowly.” Zhou Tianyi said, “I heard that this epidemic was also reported in batches and slowly. It’s not a one-time report. The citizens of Dongxing know it.”

Zhou Tianyi said that the official is afraid of attracting public attention, otherwise there will suddenly be many cases in the small place of Dongxing.

Many shops in Dongxing are closed, making it difficult for citizens to find jobs

Zhou Tianyi is in the park community of Dongxing City. He said that there are some elderly people living alone in the local area who do not know how to use the Internet to buy vegetables, nor do they have mobile phones that can be used for payment, and the vegetables sold on the Internet are very expensive. “Things like phoenix mushrooms can be sold for 16 yuan a pound, and pickles can be sold for 13 yuan a pound.”

“My family’s income can barely survive, my dad works from home, and it’s very difficult to go out to work now,” he said. “Those who don’t have a job are really struggling to survive, they really can’t survive.”

Zhou Tianyi hopes that the media will pay attention to the Dongxing epidemic situation and report it in detail. He hopes that the epidemic will end as soon as possible and return to school.

Middle school student Xiaoying revealed to The Epoch Times that mass protests broke out in Dongxing City on June 5 this year. “The protest leaders were not well managed, controlled or something, but the leaders didn’t come forward, only those security police stopped there.”

“The situation in the cabin is also not very good. There are a bunch of people, just a few doctors and nurses. No medicine will be given to you. If the child has a fever, he will ask you to drink more water, but the water is still not available.” Xiaoying said, ” Supermarkets and fast food restaurants have all moved or closed down, and all the people who worked there have run away. Dongxing City is almost an empty city.”

In addition, some netizens disclosed their experiences online.