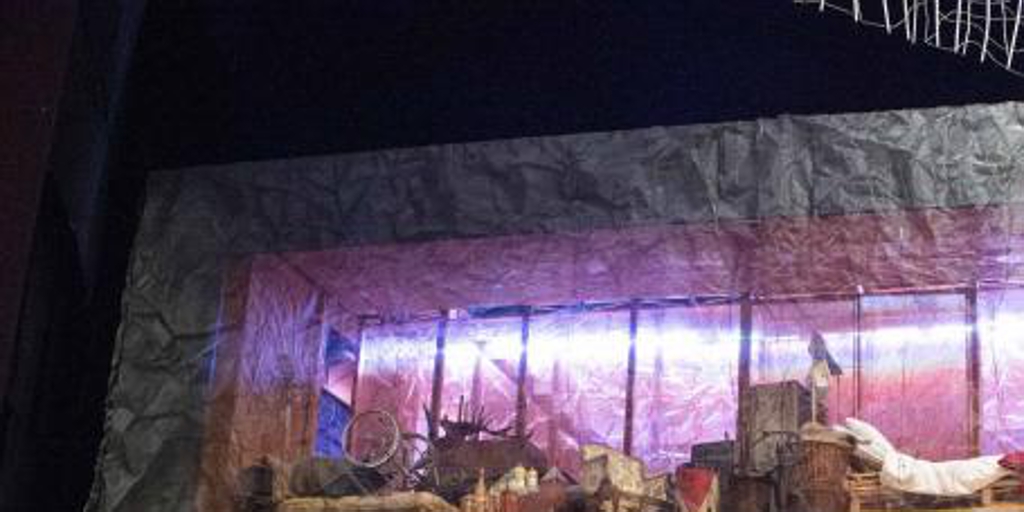 It all started as any production begins in
the lyceum
: with a few trailers going down the Ramblas and making an impossible maneuver to back into the loading dock. More than a dock, an elevator, since the containers with the future sets are deposited on a hydraulic platform that descends sixteen meters, until reaching the depths of the theater. “That metal box you see up there, half embedded in the wall, is line 3 of the Metro,” the head of the Liceo stage for the production of ‘Pelleas and Melisande’, Miguel Ángel García, while the ABC photographer, Inés Baucells, and myself, try to recover from the feeling

having reached halfway to hell.

Once the trucks are unloaded, the pieces of the scenery are mounted on other hydraulic platforms -here there is not an inch of ground that is still- that will take them to the area of ​​the scenic box that corresponds to them, occupying the minimum possible space. For a moment, it seems to me that Michelangelo should not have a rival playing Tetris.

And to think that, just a few days before, we had been at the top of the theater. The living room Mestres Cabanes it is rather bland, rather impersonal. Understand: it is spacious, bright and practical for its role as a rehearsal room. It’s not her fault: she’s bland because she has to be. She is located in the highest part of the Lyceum, just above the sumptuous ceiling that we contemplate from the stalls.

There, the singers move through an almost empty space where the future stage is reduced to a lot of colored marks on the ground: this indicates that here there will be some stones, there a ladder, around us an entire forest. And now, sing as if you were watching it. the stage manager, Àlex Ollé, and his entire team work on every gesture, every movement, so that the performers assimilate what they will have to repeat a few weeks later in front of almost two thousand people at each performance. The day we visit them, Pelléas (Stanislas de Barbeyrac) and Mélisande (Julie Fuchs) are learning to look at each other, to kiss, to hug each other, while they hum their respective parts – at this stage of the rehearsals it is best not to tire your voice too much.

On one side of the room, the music director, Josep Pons, conducts an also imaginary orchestra that, at the moment, is just a piano. It is the way to work the most complicated tempos and inputs. Rehearsals with the orchestra take place a few floors below, in another room as unattractive as the Mestres Cabanes, but without natural light. If there was a choir in this production, it would be in a third room, preparing its part. In addition, each of the singers has hours of individual preparation in other spaces.

As soon as the performances of ‘The Queen of Spades’ are over, ‘Pelléas et Mélisande’ takes over the stage. And what a way to settle. All the action takes place on a sheet of fifteen thousand liters of water. “Water is a symbolic element, but for us it is very real, and it is cold”, Fuchs will point out at the press conference to present the show, since the singers walk through it barefoot. “For the performances we will heat it up a bit,” Àlex Ollé consoles her.

On the water, a huge rotating structure simulates a two-story building (7.60 meters high, 12 meters long). It is covered by a fine aluminum mesh, which, depending on how it is illuminated, can be totally transparent or can look like a block of stone. Some metal structures evoke the forest where part of the plot takes place. the set designer, Alfons Flores, he admits that everything transmits a sensation of beauty that “has not been wanted, but a coincidence”, since “what he was looking for is that it exercise fascination”.

Being in there, in the room where Mélisande will give birth, looking at the stalls, is impressive even if you don’t have to go out to sing. But Golaud (Simon Keenlyside) and Yniold (Ruth Gonzalez) don’t seem worried today. They simply make an effort to put into practice what they have learned in the classroom. heaven room between the scenic elements that come from the infernal abyss. The stage is no longer a purgatory.

The protagonists of Maeterlinck’s symbolist drama, to which Debussy put exceptional music in 1902, will be there until March 18. The singers will be the visible part of a team of nearly two hundred people who have worked on the production. A strange work, which according to Ollé «makes us constantly ask ourselves things, rather than find answers». We don’t know very well who the pregnant and fragile Mélisande is, or where she or the rest of the characters come from or where they are going. Hence the magnetism of the piece, although the response of the public is not like that of other more popular titles. «From ‘Pelléas’ you don’t come out whistling a melody, but feeling transported by emotions», comments Pons.

Ligue 1: Reims delays kick-off in Monaco in support of Ukraine