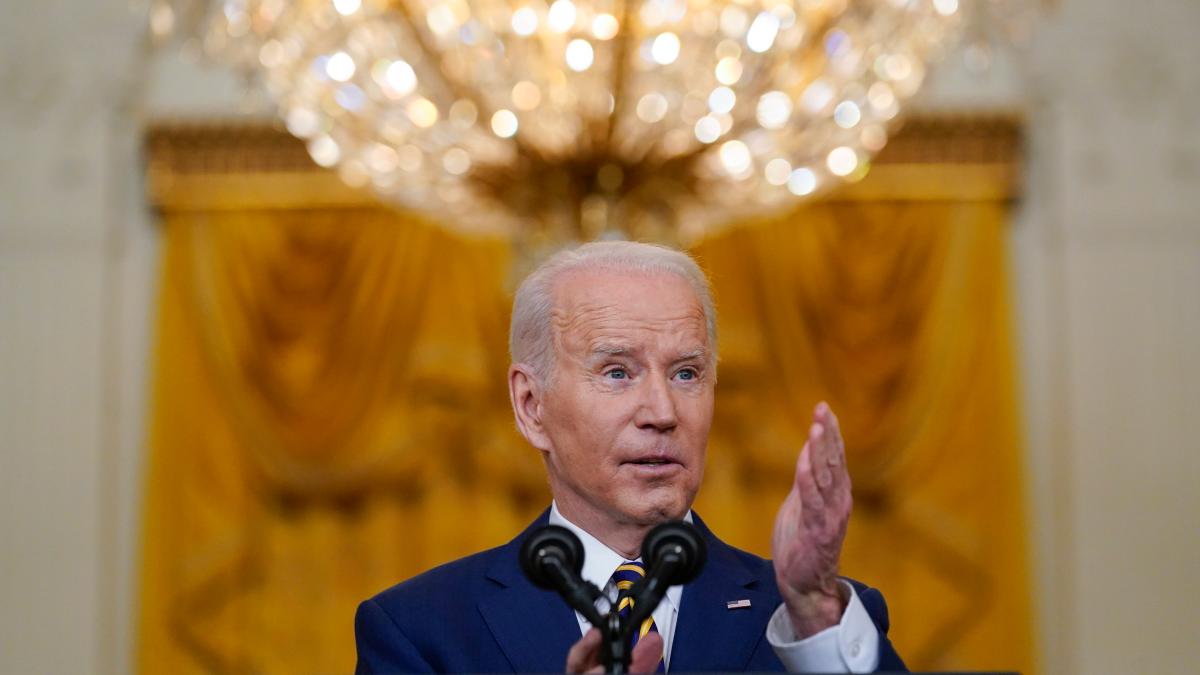 Background: It has been a year since Joe Biden’s inauguration on Thursday. That’s why Biden, 79, is giving one of his rare press conferences on Wednesday afternoon. The president is under pressure, he has miserable poll numbers, his central social and climate project is not being pushed through, and he is failing because of senators from his own party. There’s seven percent inflation that the White House has no answer to. The Covid management is not running.

In short: Biden does not deliver, throws election promises overboard. The Democrats are therefore threatened with an electoral defeat in the midterm elections in November.

Framework: Biden has not held a press conference for 78 days. He speaks from 4:02 p.m. in the East Room of the White House, begins with the salutation “Hello folks”, and then talks for a quarter of an hour about his supposed successes. He then answers more than 40 questions for a good one and a half hours.

Biden stumbles several times. He shows lack of concentration. He closes his eyes several times and stares at the ceiling in order to be able to concentrate. After more than an hour of questions, he looks at his watch and asks the reporters, “How much longer did you want to do this?” Give them another 20 minutes. You can understand why Biden’s staff want to see the President in front of the microphone as little as possible.

Biggest mistake: Biden says he believes Russian soldiers would invade Ukraine. That was solely Vladimir Putin’s decision. He wanted to “test” the West. However, he does not believe that Putin wants “a full-fledged war”.

“It’s one thing if it’s a minor intrusion,” Biden said of a possible NATO response. But what does he mean by a “minor incursion”? The term is pronounced in the world.

In the State Department, they’re allowed to grab each other’s heads. Especially in the National Security Council. Just imagine: On the eve of a possible Russian invasion of Ukraine, i.e. a war in the middle of Europe, the US President philosophizes about what might be called a small Russian invasion and, indirectly, a cautious reaction from NATO. To put it bluntly: does the US allow Russia a small part of Ukraine? Even during the press conference, the White House tries to limit the damage. A spokeswoman tweeted that Biden later “clarified” the matter.

He referred to the difference between Russian military and non-military actions, such as cyber attacks. Indeed, Biden later digs into the issue. However, he does not clarify his previous statement and does not take it back. In view of this grave error, the threat of sanctions in the event of an invasion (“a disaster for Russia”) does not seem very powerful.

Half an hour after Biden’s appearance, his spokeswoman felt compelled to make a statement. “If Russian forces move across the Ukrainian border, that will be another invasion, and the United States and our allies will respond quickly, harshly, and as one,” it said.

Biden’s statement has already caused trouble. The US broadcaster CNN quoted an unnamed Ukrainian government official as saying that he was “shocked that US President Biden distinguished between intrusion and invasion”. This gives Russian President Vladimir Putin “the green light to invade Ukraine at will”. Prominent Republican senator and foreign policymaker Lindsey Graham says he is “stunned” by Biden’s words.

Serious error: Biden is asked if he thinks the conduct of the November midterm elections is legitimate. He avoids a clear answer. It depends on whether he can get his own electoral laws through Congress. To put it plainly: without the reforms he has demanded, the elections are likely to be unlawful. But what if he doesn’t enforce his electoral laws?

whitewashing: Biden praises the 210 million “fully vaccinated” Americans. By this he is referring to those who have not yet received the booster. Only 39 percent in the USA have the booster (Germany: 48.3 percent). Biden claims that he has not promised too much – while he was already invoking “independence from the virus” in the summer of 2021. He praises the Covid tests that the government is now – in year three of the pandemic – starting to send out to the population. Biden emphasizes: “I’m an optimist.”

Admission: The central social and climate package has been in the Senate for months, party friends are blocking it. Biden is confident that “large parts” of the package would become law. He does not describe the way there. It’s an admission that the already halved package needs to be further filleted to implement parts of it. But what exactly? When? As? All of that remains open.

Soft Attacks: “What do the Republicans stand for?” “What is their platform?” “What does Mitch McConnell want? What is his position in migration policy? In dealing with Russia?” In fact, all of this is open, the Republicans have no program, they only have Donald Trump. But the Democrats will hardly win the congressional elections in a good ten months with such cotton ball questions.

Biden wants to compete again with Harris in 2024

Short and worthless: “Yes and yes” is Biden’s shortest answer. He’s responding to two questions: whether he agrees with Vice President Kamala Harris’ performance on electoral reform and whether he wants to run with her again in 2024.

The question is legitimate, Harris’ record is modest, her poll numbers are disastrous. But Biden’s answer is worthless. As of today, another Biden/Harris candidacy in 2024 seems unlikely. Biden just can’t allow a debate about Harris right now. However, he would have done that with any answer that wasn’t “yes and yes”.

Doubts about the team: The Biden-friendly television station CNN asked if he was satisfied with the competence of his administration and his staff. The question is there. But Biden doesn’t show anything, saying: “I’m happy with my team.” That’s true insofar as he hasn’t fired a minister or top official so far.

confession: “I’m not a socialist. I’m a mainstream Democrat.” (When asked by Fox News why he was pulling the country so far to the left.)

taciturn: “I have no idea.” (When asked by right-wing pro-Trump TV station Newsmax why so many Americans allegedly think he is mentally unfit to be president.)

contradiction: “I don’t believe in polls,” says Biden, only to talk at length a few minutes later about his own approval ratings and those of his predecessors after a year in office. With various percentages.

Conclusion: An embarrassing appearance by the US President with politically highly dangerous statements that the White House is now trying to put into perspective as a slip. Biden is glossing over the state of the country. He doesn’t point out how he can get approval for electoral reform laws and the social package.

An outlook for the next three years? none. Biden’s team is likely to push even more rigorously in the future to limit the number of its press conferences.

MS: Is Epstein-Barr the long-sought trigger?