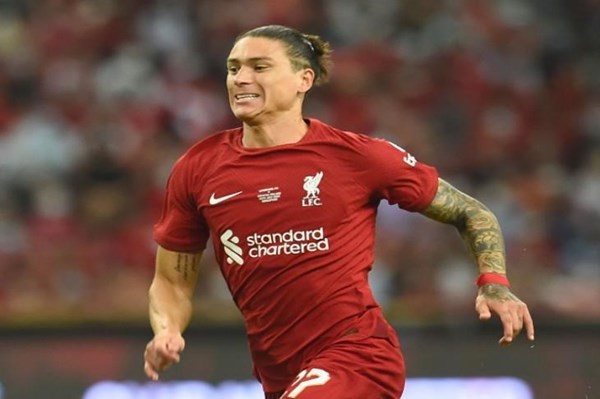 Liverpool manager Jurgen Klopp has praised Darwin Nunez’s physical and technical abilities, saying that critics of the Uruguayan striker did not give him enough time to adapt to his new surroundings before being judged.
Nunez, who was signed by Liverpool from Benfica for 75 million euros ($76.45 million), has been criticized after he failed to do well in a tough 4-0 pre-season defeat to Manchester United.
After his early struggles, Nunez scored four goals in a friendly match against RB Leipzig, and scored in Liverpool’s 3-1 win over Manchester City in the Community Shield match, and in the league tie with Fulham last week.
Klopp told Sky Sports: “Five weeks ago, when we started pre-season, Nunez didn’t do well from the critics’ point of view in his first game. Relative to the rest of the players out there, he is an active striker and has a lot of energy.
He added, “He is very strong physically and technically, and these things will increase with more stability, harmony, confidence and a sense of security in his new surroundings.”
And Klopp stressed the importance of giving players more time to blend in with their new teams, and said that Erling Haaland, the newcomer to Manchester City, also faced early criticism.
Haaland missed several chances and struggled to fit in with his new teammates in the Community Shield defeat, but scored two goals against West Ham United in his first appearance in the league, and assisted in City’s 4-0 win over Bournemouth on Saturday, and Klopp said: “You can’t ask Any player can give you 100 percent of his effort and skills right away, we are developing Nunez’s performance at the moment and in a good way.”

‘Kindergarten’, a heartbreaking song with honors from ‘getsunova’, comes with the MV of the 80’s heroes, losing love.