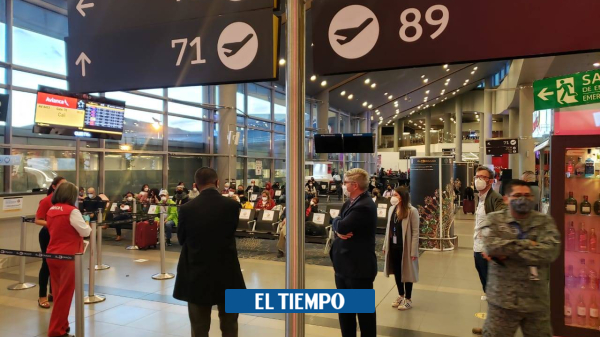 As at the global level, the advancement of omicron variant It is beginning to impact the operating personnel of the airlines in Colombia. At the moment and for this reason, on average between 40 and 45 daily flights are being canceled, which represents around 4 percent of the country’s total operation. However, although the concern is latent, experts consider that the situation does not threaten the recovery of the airline industry that had been taking place.

(You can also read: Grupo Argos will analyze legal actions against Daniel Quintero)

Mainly, there are three airlines that are registering the most and being affected due to the disabilities of their personnel infected by the virus: Avianca, Latam Colombia and Viva Air. Although he has had delays on some itineraries, so far, Wingo says he has not had to cancel any flights. Easyfly has not had any problems this month either.

For example, as EL TIEMPO learned, on Friday 41 flights were canceled: 33 of them were from Avianca, another 6 from Latam Colombia and two from Viva Air. On Saturday there were another 50 and, according to the Flightaware portal, which monitors air traffic, yesterday, until 4:50 pm, there were another 26.

In most cases, companies are rearranging passengers on subsequent flights or, if possible, on the same day, and offer users facilities to alleviate the impact. In addition, there is a permanent monitoring of the authorities and the airlines in a daily unified command post. Some of them have even given advance notice of the cancellation of flights to reduce the impact on passengers.

Latam Colombia canceled 53 flights from last January 8 until the next 16 of the same month, which corresponds to 4.5 percent of the operation of those days

Latam Colombia canceled 53 flights from January 8 until next January 16, which corresponds to 4.5 percent of the operation on those days, because 18 percent of its crew members are infected with omicrom . Among these, for today there are some such as LA 4006 from Bogotá to Medellín, at 1:41 p.m., or LA 4135 from Barranquilla to Bogotá, at 5:34 p.m.

Avianca announced the early cancellation of 4 percent of its operation, mainly local in Colombia, until January 15. “Like the entire sector globally, we view with concern the advancement of the omicron variant and its impact on the operating personnel of different airlines around the world,” said the airline, led by Adrian Neuhauser.

Viva Air also announced that cases of contagion have been reported in their company and that they have been forced to reschedule 4 percent of their flights within the country as well.

For his part, from Wingo, Jorge Jiménez, its director of Sales, Marketing and Distribution, pointed out that, in the case of observing an increase in disabilities due to compliance with mandatory or preventive quarantines, they will give priority to health, always considering all the options and resources available before resorting to flight cancellations, avoiding the greatest possible impact on travelers’ plans.

“Although the uncertainty about flights is growing due to the omicron variant, at Wingo we are looking for a way to give the traveler peace of mind that they can buy knowing that they can make variations in their flights. We are the only airline in Colombia that offers the passenger, in all its rates, the possibility of making a change of travel date up to 15 days before the flight, without charging a penalty, paying only the fare difference, if any. ”, Expressed Jiménez.

Alfonso Ávila, president of the Easyfly airline, acknowledged to EL TIEMPO that he is really much more concerned about the reaction of passengers due to the uncertainty generated by this new variant than about the effects it has caused in Colombia. “Let’s hope that the health authorities give us an orientation that reassures the passengers,” he said.

(You can also read: What does housing cost in the municipalities of the Sabana de Bogotá?)

The figures for air transport and local tourism recovered last year at the rate of economic reactivation. In fact, the Minister of Commerce, Industry and Tourism, María Ximena Lombana, highlighted a few days ago the gradual increase that has been taking place in the arrival of non-resident visitors to the country. The estimate in 2021 was to reach 1.9 million tourists and by 2022 the goal is 3 million. However, it is too early to know if this contingency can affect that purpose. In addition to this, he stressed that the GDP of accommodation and food services could close at a figure close to 32.9 trillion pesos.

“Although a slight decrease in traffic could be registered in the short term, we anticipate that the Colombian domestic market will recover to pre-crisis levels in 2022/23

However, while for now the impact of the omicron variant It has been less, the question is what could be its impact if it intensifies, if in that case it could halt or not this recovery that has been taking place.

According to Andrés Uribe, manager of the International Air Transport Association (there it is) for Colombia, the effect varies from one country to another and from one region to another, although the projections in the country remain for the moment. “Although a slight decrease in traffic could be registered in the short term, we anticipate that the Colombian domestic market will recover to pre-crisis levels in 2022/23 and that international traffic will reach 2019 levels in 2023/24.”

Gilberto Salcedo, Vice President of Tourism at ProColombia, was also optimistic about what may come and stressed that there is a very different panorama from a year ago, with high levels of vaccination, a tourism industry prepared with biosecurity protocols and a better understanding of the disease and its consequences on public health and the economy. In addition, he stated that it is necessary to continue to build trust through sanitary measures and standardize entry requirements.

“The proof of this progress has been the performance of air connectivity in Colombia. In 2019, the best year for international tourism, 17 new international routes were achieved. In 2021 there were 35, twice the number of the best year in tourism (…). We must continue to coexist with covid-19 and its variants such as delta and omicron, mitigating contagion through adequate biosafety protocols, “he said.

What can you do if your flight is canceled?

The cancellation of a flight due to a health emergency must be notified to the passenger within the established period and up to 24 hours before the original flight date. If your flight is canceled, the airline offers refund options or Travel Vouchers, which offer other types of benefits.

Latam Airlines offers the return of the ticket, boarding fees and additional services purchased with money, miles or Latam Pass points. In order to access these benefits, you will have to complete the ‘Refund Request Form’ through the airline’s website.

On the other hand, Viva Air will provide you with a voucher that will allow you to select your destination again with another travel date or use it as a payment method for products within the airline.

Finally, if Avianca canceled your flight, the tickets that include a refund in ‘rate types’ may generate the procedure that will have an additional charge. This will be deducted from the amount to be returned.

If you have a complaint or claim that cannot be solved through the airline, you must submit your request to the Superintendency of Transportation.

(You can also read: Gilinski achieves positions on the boards of directors of Nutresa and Sura)

In Crans-Montana – After a corona infection, Chiara Ferragni is on vacation in Switzerland