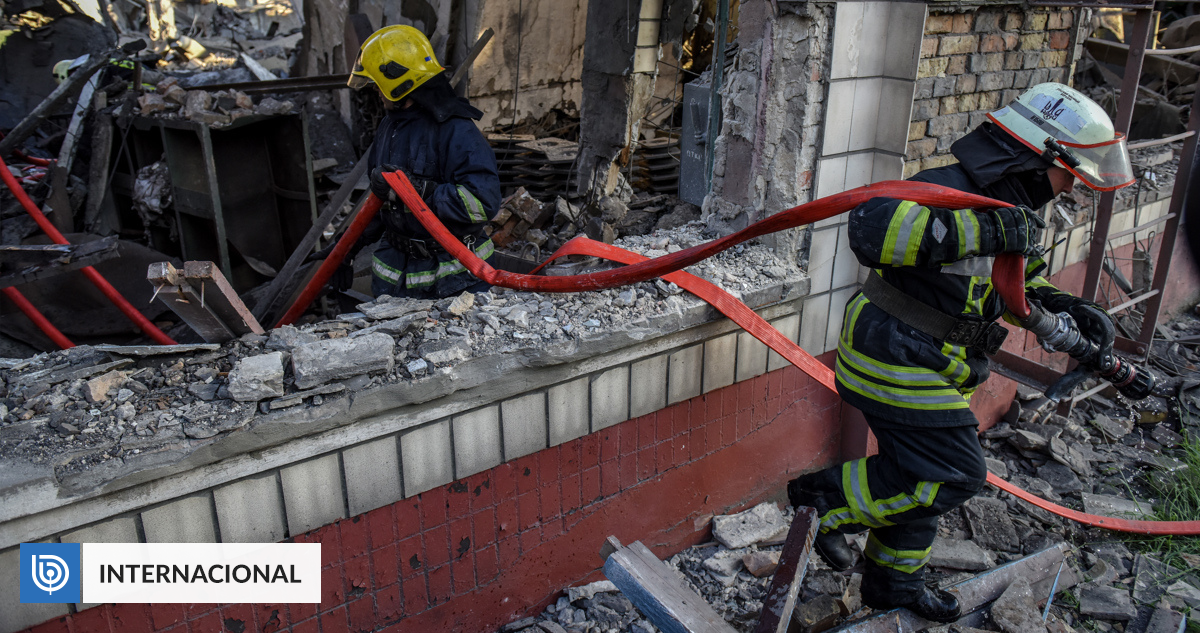 Russia again attacked kyiv and its surroundings today in the first attack on the Ukrainian capital in more than a month, coinciding with the threat of Russian President Vladimir Putin that he will hit new targets if Ukraine receives missiles from the US and other Western countries. long-range.

kyiv -until this Sunday- had not been the object of attacks since April 28, when the UN Secretary General, António Guterres, was in the capital to meet with the Ukrainian president, Volodímir Zelenski.

After 05:00 (Kyiv local time), the Russian Armed Forces launched five X-22 cruise missiles from the Caspian Sea in the direction of the capital of Ukraine, according to the General Staff of the latter country.

One of the missiles, launched from Tupolev Tu-95 strategic bombers, according to the Ukrainian Air Force Command, was intercepted over the Obukhov district of the region.

The rest impacted infrastructure in the north of the capital, according to the General Staff.

The Russian Defense Ministry claimed to have destroyed T-72 tanks and other armored vehicles on the outskirts of kyiv. supplied by Eastern European countries to Ukraine who were in a railway car repair plant.

kyiv Mayor Vitali Klitschko said there were explosions in the Darnitsia and Dnipro districts. One person was hospitalized.

In addition, Russian forces fired missiles at the town of Brovary in the kyiv region, according to the mayor, Ihor Sapozhko.

The attack coincided with Putin’s warning to kyiv and the West in a previously recorded interview on Russian public television.

The head of the Kremlin affirmed that the Russian Armed Forces will attack targets that until now had been spared if the West supplies Ukraine with long-range missiles.

“If they do supply them, we will draw the appropriate conclusions and use our weapons, which we do not lack, to attack those targets that we have not hit so far,” he said.

Putin made the remarks after the White House announced a new $700 million military aid package to Ukraine, which includes multiple HIMARS missile launchers with a range of up to 70 kilometers.

The US made this decision after Zelensky promised not to use them against Russian territory.

Putin assured that the US decision will not fundamentally change the balance of power on the ground, since the weapons of the US and other countries are intended to replenish the war material lost by Ukraine during the hostilities.

“There is nothing new here. First of all, these multiple-launch missile systems are already in the hands of the Ukrainian Army: they have similar Russian-made Soviet Grad, Smerch, Uragan”, capable of reaching between 45 and 70 kilometers, he stated.

The Russian president considered that, in general, “all this fuss about the supply of additional weapons (to Ukraine) pursues a single objective: to prolong the armed conflict as much as possible.”

Since withdrawing from northern Ukraine, Russia has sporadically attacked the capital, as well as other places such as Lviv in the west; Chernigov, in the north; Sumy, in the northeast; and Kharkov, in the east, despite having concentrated all its efforts on Donbas.

There, the fight for Severodonetsk and neighboring Lisichansk, the last major cities under Ukrainian control in the Lugansk region, continued today.

In Severodonetsk the Russians control the eastern part of the city, the General Staff said today.

After occupying 70% of the city, Ukrainian troops have recovered 20% of the territory “in two days” and now the city is again “split in two” in what is a real war of attrition, the region’s governor, Serhiy Gaidai, said today.

According to the Ukrainian military command, the Russian units are focused on encircling the Ukrainian troops not only in the area of ​​this city and in Lisichansk, but also trying to block their main logistics routes.

To do this they try to cut the road between Bajmut, in the Donetsk region, and Lisichansk.

According to Gaidai, the Russian general in charge of the operation in Donbas may have been ordered to “take Severodonetsk until next Friday or completely cut off the road and take it.”

According to Rodion Miroshnik, the “ambassador” to Russia of the self-proclaimed Lugansk People’s Republic – recognized as independent by the Kremlin – separatist militias “are fighting on the outskirts of Lisichansk.”

Meanwhile, the pro-Russian troops in Donetsk claim to be about 19 kilometers from the strategic city of Sloviansk, key to taking the Ukrainian military stronghold of Kramatorsk.

Russian troops have not yet started the final offensive in the Donetsk region as they focus all their efforts on Luhansk.

If you take this region, the Russian Army will need considerable time to recover and regroup before a major offensive can be launched in Donetsk, experts agree.

“When will we have enough weapons? Soon. And they will see it as soon as we start a more intense counterattack, said presidential adviser Mykhailo Podolyak.

According to his colleague Oleksiy Arestovych that will not be until the second half of July or August.

Jack Miller: “Times like with tires from the store” / MotoGP