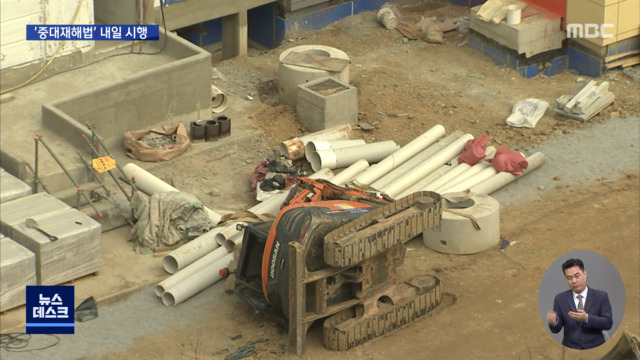 The ‘Severe Accident Punishment Act’ that can punish even the representative of the original contractor if a serious accident occurs at an industrial site.

It is now in effect from tomorrow.

However, even today, one day before the law goes into effect, there have been accidents where workers have died at the site.

Reporter Lee Mun-hyeon will tell you whether the law will change once it is enforced.

A construction site for an apartment in Gwangju.

The excavator is fully lying on its side with the bottom exposed.

Around 9 this morning, the excavator that was moving one ton of material fell to one side on the sloping ground.

At that time, the door of the excavator was open, but the driver, Mr. Kim in his 50s, who was thrown out, was hit by the excavator and died.

“The equipment just came and the ground passed like this (slope) a little bit, and it was tossed over a little bit, but the door of the pokane (excavator) didn’t close…”

The contractor in charge of the rental housing construction ordered by LH subcontracted to a civil engineering company, and the subcontractor signed a contract with Mr. Kim, a private excavator operator, and entrusted the work.

Until now, if a worker died due to violating safety measures, only the person in charge of safety and health, that is, the site manager, was punished.

However, if the Serious Disaster Punishment Act goes into effect tomorrow, not only the site manager, but also the representatives of subcontractors and contractors will be held responsible.

The level of punishment has also been increased to more than one year in prison or a fine of not more than 1 billion won.

However, small businesses are still in a blind spot.

There is also a concern that companies will use a trick to split their business sites into small pieces.

81% of deaths from occupational accidents occur in small businesses with fewer than 50 employees.

The National Human Rights Commission of Korea also pointed out that “the law should not make any exceptions or delay the application of the law,” although “even the employers are held accountable by the Serious Disaster Act.”

This is Lee Moon-hyun from MBC News.

Learn about the new update from WhatsApp for iOS Apple phones

Miraculously, Medvedev wondered, “What would Novak do?”