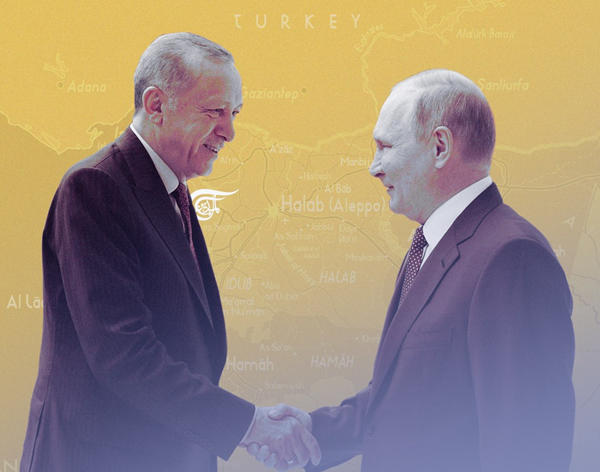 Russia’s view of the Syrian file differs from its view of the Turkish file. Despite Syria’s importance to it, there is, for it, a single file intertwined with a group of files, and it falls within the Russian perception of the region extending from West Asia to the Gulf, the Red Sea and North Africa.

Two weeks after the tripartite summit in Tehran, Turkish President Recep Tayyip Erdogan left his meeting with Russian President Vladimir Putin in Sochi in a different image from the previous meeting. And at the moment of farewell, in a way that draws question marks regarding the status of northern Syria, but rather about the future of Syria.

Russian presidential spokesman Dmitry Peskov pre-empted the meeting with a statement in which he expressed what he called “Moscow’s understanding of Turkey’s legitimate security concerns regarding Syria” and that it would “take them into consideration”, in a way that gives the impression that it accepts a military operation there, despite his realization of the importance of avoiding actions that It could “threaten Syria’s territorial integrity and political unity,” noting that Putin and Erdogan’s meeting would focus on Syria and Turkey’s concerns there.

Russia’s view of the Syrian file differs from its view of the Turkish file. Despite the importance of Syria to it, there is, for it, a single file intertwined with a group of files, and it falls within the Russian perception of the region extending from West Asia to the Gulf, the Red Sea and North Africa, according to a specific vision of the future regional system, which is being built, Under the roof of the new international order, which is expected to be born within a decade.

This is in contrast to the Turkish file, which is of paramount importance to Moscow, if it is according to the Eurasian conception of President Putin, Alexander Dugin, so that Turkey and Iran are considered two cornerstones for the success of the project, or because of the facts imposed by Turkey on the ground as an active force, in Areas where its interests are intertwined with the Russian interest, in Syria, Libya and the Caucasus directly, and in Iraq and the Gulf indirectly.

The situation was also not different for Turkey, which, after the war in Ukraine, established itself as a geopolitical position with demographic weight indispensable to all international parties. It made itself a mediator between Western and Asian powers, especially after it felt the great unwelcome openness to it in the south. Despite the reconciliation with the United Arab Emirates, “Israel” and Saudi Arabia, this did not translate into its call to be in a regional system to be worked on between these countries, and with it Egypt, which refrained from going towards full reconciliation, before the issue of the Muslim Brotherhood was fully resolved. In addition to the price of reconciliation, which requires Ankara’s exit from Libya, and the complete abandonment of its Islamists.

In this general atmosphere, the meeting took place in Sochi, focusing mainly on a general set of interests between the two countries, which are the most urgent interests of the two countries, in a way that serves each of them in the battle they are waging. For Russia, it focuses on the two most important weapons it possesses, which are wheat and gas, through which it was able to alter the wheel of the Western attack on it, and to backfire on the United States and the European Union countries, and on the whole world, in the form of internal economic threats, through the rise in the level of inflation to levels not yet known. It has been going on for decades, high unemployment, with threats of further economic deterioration as the next winter approaches.

With regard to the wheat weapon, which Russia ranks third in the world in its production after China and India, Turkey can play an important role in coordinating the process of its production and its arrival in the countries of the world, whose interests are linked to Russia. As for the gas weapon, Russia is keen to close all available alternatives to supply the European Union countries, especially Azerbaijani gas, which reaches Europe through Turkey and comes from Georgia, and Turkey can play an important role in preventing the use of the Azerbaijani gas weapon, in exchange for the continued flow of gas The Russian Federation, through it, with economic stimuli that relieve pressure on the Turkish lira, by moving to a gradual plan, allowing the transition to transfer its price in national currencies. This prompted the announcement of a first stage of payment in the Russian ruble as a preliminary test, pending the transition to payment in the Turkish lira, which contributes to raising the popularity of the Turkish president, who is suffering from the significant decline in the Turkish economy.

Therefore, there was no real presence of the Syrian file at the table of talks between the two presidents, except through the statement of the official spokesman, Dmitry Peskov, before the meeting, and that the next discussion was postponed to the tripartite meeting in Moscow before the end of this year, and it may not provide anything new after the tripartite meeting In Tehran, who did not like Erdogan, because of what he heard only from Supreme Leader Khamenei and President Raisi, but not from Putin, who was preparing to meet Erdogan after the meeting, and this prompted Turkey to increase its presence in Idlib, especially to the south of the M4 road, and to establish military points New, without objection.

It has become clear that Russian-Turkish relations, as well as Russian-Iranian relations, are of paramount importance to Russia, despite the Turkish-Iranian dissonance in Syria, and this is what makes the Syrian issue not a priority on the table of regional and international files, and pushes it towards the waiting angle more than any previous stage Until the results of the war in Ukraine become clear, and then the issue of Taiwan, and the effects it could have on the Syrians who are waiting for their exit from their catastrophe that has exhausted them.