“He will connect the ring” .. Watch the implementation works of the third phase of the third line of the metro

The Kit Kat station is the interchange station at the axis of Rawd Al-Farag and Cairo University. The length of this phase is 13.7 km, and it includes 11 stations (4 tunnels – 5 upper ones – 2 surface).

And the second part 3BIt is to be implemented at a length of 6.6 km, and includes 1 underground station “Sudan” + (4) overhead stations “Imbaba – Al-Buhi – Al-Qawmia Al-Arabiya – Ring Road” + 1 surface station (the final station at the Rawd Al-Farag axis). The trial operation plan is in July 2023. .

The third phase of the third line of the metro

Part of the work of the third stage
December 3, 2022 0 comment
0 FacebookTwitterEmail 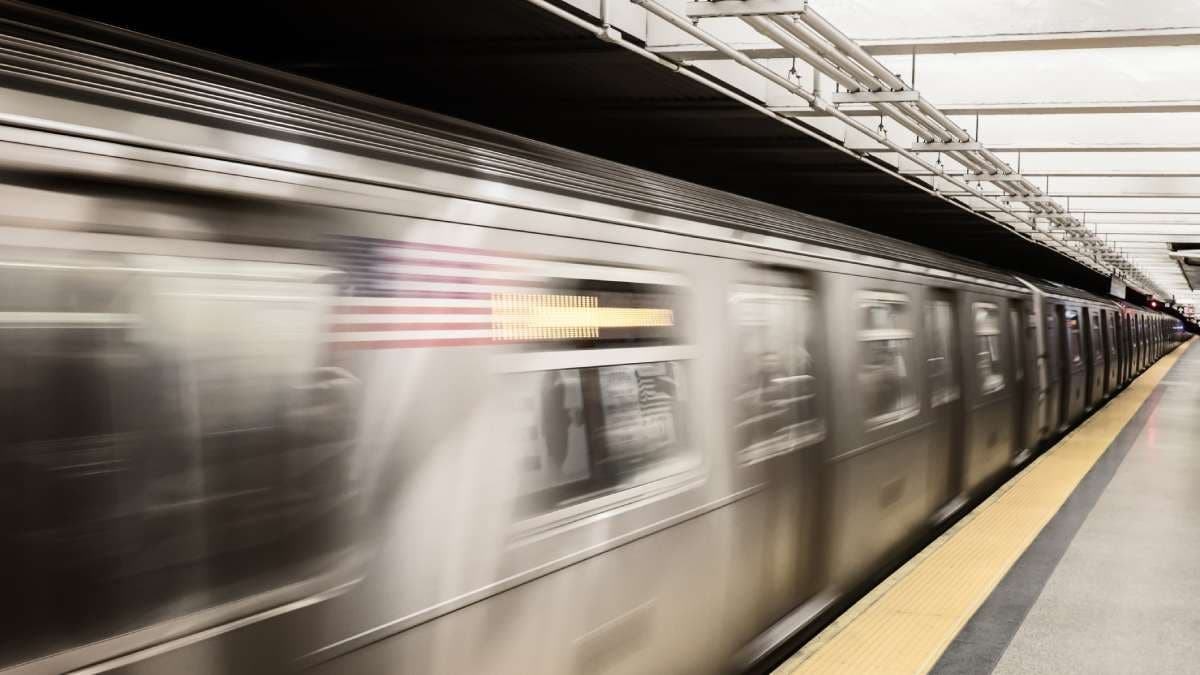 Teenager dies after falling from the roof of a subway car

The young man fell onto the electrified rails and the authorities who attended the scene declared him dead.

A 15-year-old boy died after falling from the roof of a subway car in which he was “surfing”in New York, United States.

The event was recorded during the morning of this Thursday, when the adolescent was mobilized on one of the machines of the J line, which was heading to the bridge Williamsburg, Brooklyn.

As reported PeopleIn the middle of his actions, the young man fell under the train and made contact with the electrified third rail.

When the situation was alerted, Security agents arrived at the scene of the event. y they declared him dead.

This is not an isolated incident in New Yorksince in the last days Videos of young people who are used to “surfing” in the subway have gone viral.

In fact, in June, a 15-year-old boy was injured after hitting his head with a “unknown object”; and in august, another young man lost an arm in similar circumstances.

The Subway is overflowing! Users waited up to 40 minutes for Line 9 trains

Hundreds of users of Collective Transport System (STC) Metro They were trapped in different stations of the line 9 by the long lines of people who, they denounced, had even 40 minutes waiting for a train

Through social networks and in chat groups of users of said line, they shared their inconvenience due to the long time to enter the Metro.

Likewise, many published videos and photographs with crowded users and asking for explanations before the stopped trains. All this on a fortnightly Friday, just at the “peak hour” of passengers.

Line 9 to die as always pic.twitter.com/rsNY088Ka1

Medical Center y Vulgar They were one of the stations most reported by users, who recorded large crowds of people waiting for a convoy on video or photos.

Given these facts, the metro announced via Twitter, until 7:44 p.m., that it would start sending empty trains to Line 9 stations with the highest demand.

#AvisoMetro: Empty trains are sent to Line 9 stations with the highest demand, it allows the free closing of doors and does not activate the emergency levers without reason.

However, at 8:15 p.m. he commented that he was still sending the convoys, while users continued to report delays.

subscribe here to receive our newsletters on daily news, opinion, options for the weekend, Qatar 2022 and many more options directly in your email.

It connects all areas of Greater Cairo.. Details of the four metro lines network

Egypt is implementing a plan to expand the metro network to connect Greater Cairo with each other, and we present in the following points the metro lines that have been implemented, are being implemented, and are planned to be implemented.

The first line extends from New Marg to Helwan, with a length of 44 km and 35 stations.

– The second line: It extends from Shubra El-Kheima to El-Mounib, with a length of 21.6 km and 20 stations.

The Sixth Line: It is planned to be constructed and extends from the Khosus area in the north to the New Maadi area, with a length of 35 km and 26 stations.

East Cairo is also linked to its west through:

– The third line: extending with a length of 41.2 km and numbering 34 stations from Adly Mansour central station in eastern Cairo, passing through Gesr El Suez Street, Heliopolis and the downtown area, then crossing the bottom of the Nile under Zamalek Island until Kitkat, then branching north to Imbaba and south to Mohandessin, reaching Cairo University.

The Fourth Line (Al-Haram Line): 42 km long and 38 stations. It connects the governorates of Cairo, Giza, and 6th of October City, as it extends from the borders of 6th of October City, passing through the Grand Egyptian Museum, then Al-Ramaya Square, then Al-Haram Street, until the Giza Station, to intersect with the second line of the metro, and then extends It intersects with the first line of the metro at Al-Malik Al-Saleh station, then extends to Al-Fustat station, to intersect with the sixth line, then to Salah Salem Street, then Al-Nasr Road several times in Nasr City, to end at the city of the central station for mass transportation.

During the Infrastructure congress that takes place in Cartagena, the president Gustavo Petro He referred to the project for the first line of the Bogotá metro and questioned the ability to finance a metro that, he says, is more expensive than the subway.

“To date the project has changed, after 8 years, almost 9, we do not know the study and design of the other project, it was simply suspended, it was simply not to the liking of certain layers of political life that Bogotá had an underground metro, affected interests, it was not a technical or financial problem, because Colombia could sustain that project,” Petro said.

The president affirms that currently, the National Government is unaware of the design studies of the elevated metro project for Bogotá, even so, he affirms that this new form of metro is “weaker and less important than the first one”.

“What is up to us now, not as the Mayor’s Office, but as the national government, is to know how a project of 35 billion pesos can now fit into a current financial structure that is undoubtedly weaker than the one we had in 2013 or 2014” Peter assured.

And he added: “I believe that this is one of the circumstances that should call us to an evaluation of what is happening in the country, in terms of infrastructure and, above all, in terms of the paradigm shift, because if that is simply an inertia that keeps us in old technologies, the country is not advancing, it is falling behind”.

This is not the first time that the current Colombian president has criticized the first line of the Bogotá metro. He had already done it as a senator and as a candidate for the Presidency.

It should be remembered that it was Petro, when he was mayor of Bogotá (2012 – 2015), who proposed that the first line be underground. In fact, in that administration advanced basic engineering studies were carried out (they were not phase 3 studies) and the fiscal guarantee of the national Government for their financing.

However, during the mayoralty of Enrique Peñalosa the project changed radically. It went from underground to elevated and achieved all the approval processes that were required to be able to contract the project. In fact, the first line was awarded in 2019 and the start of work in 2020.

The pronouncement of President Gustavo Petro is known shortly after the Conpes (National Council of Political, Economic and Social) issued a favorable concept of the Nation to grant sovereign guarantee to the Metro de Bogotá Company (EMB), so that it can contract operations of Internal or external public credit of up to 7.84 trillion pesos or its equivalent in other currencies, in order to finance the execution of the second line of the Bogotá Metro, the Suba and Engativá line.

Said credit operations will be supported with the contributions of the Nation and the District, which are contemplated in the co-financing agreement signed by the parties. The Nation will contribute 70 percent and the District 30 percent.

“We ratify the support that we have as a Government for the transport infrastructure projects of Bogotá. That today the Conpes has given us a favorable concept is one more step for this project to go ahead and start hiring the person responsible for building it,” said the minister. of Transport, Guillermo Reyes, m when announcing the guarantee of the national Government.

The guarantee is granted because the resources of the co-financing agreement for the execution of the second line, according to the fiscal availability of the Nation and the District, will be available in a longer period of time than that required by the investment dynamics of the project. .

The project for the second line of the Bogotá metro costs around 34 billion pesos and includes a route that is mostly underground.

WITH INFORMATION FROM ECONOMICAS AND BOGOTÁ

The Psychopath Hidden Inside Us

Renowned neuroscientist James Fallon was conducting research to find brain patterns predisposed to antisocial personality disorder. While scanning the brain images of people with antisocial personality disorder, he found pathological images with low activity in the temporal and frontal lobes, which are related to empathy, morality, and self-control. The main character of the video was James Fallon himself. An investigation into his immediate family revealed that seven of them were the killers. To overcome his antisocial tendencies, Fallon consciously did what he believed was right and became more considerate of others, turning into a prosocial person. The book tells how to greet psychopaths with the right gaze so that they can integrate well into society. page 340. 22,000 won.

Elephants, which live about 70 years, do not get as many cancers as humans. Naked mole rats live for more than 30 years in oxygen-poor soil, but aging hardly progresses until the end of their lifespan. A 500-year-old Arctica clam resists and overcomes attempts to induce ‘protein misfolding’, a hallmark of Alzheimer’s disease. The author goes one step further from research conducted only with traditional laboratory animals such as mice and fruit flies and says that we must get clues to overcome the limits of human lifespan extension from animals in nature who have lived healthy for a long time against the flow of time. A book that tells you how to age healthily like animals that fly freely in the sky even after fifty and swim in the sea for more than a hundred years. page 396. 19,800 won.

◆I will live as an elegant idiot

The author diagnosed with ADHD is sensitive to noise. He is hypersensitive to the noise of motorcycle exhaust, to the point of refraining from going out. The author says that the sound seemed to break through the flesh and penetrate the body. ‘I will live as an elegant idiot’ is a book that records the ‘pain’ of ADHD people struggling with symptoms and struggling to lead a ‘normal life’. ADHD is a cruel disease because it looks fine. Due to the stereotype that it is a conspicuously distracting disease, quiet ADHD people stay in the blind spot of diagnosis for a long time and live by considering themselves ‘a little different from others’. The author was one of them. The artist affirms her own image, which is close to ugliness, and pursues ‘inner elegance’ that sees the pain of others through it without being trapped in her own pain. Living with inconvenience, that harsh and kind story. page 332. 17,500 won.