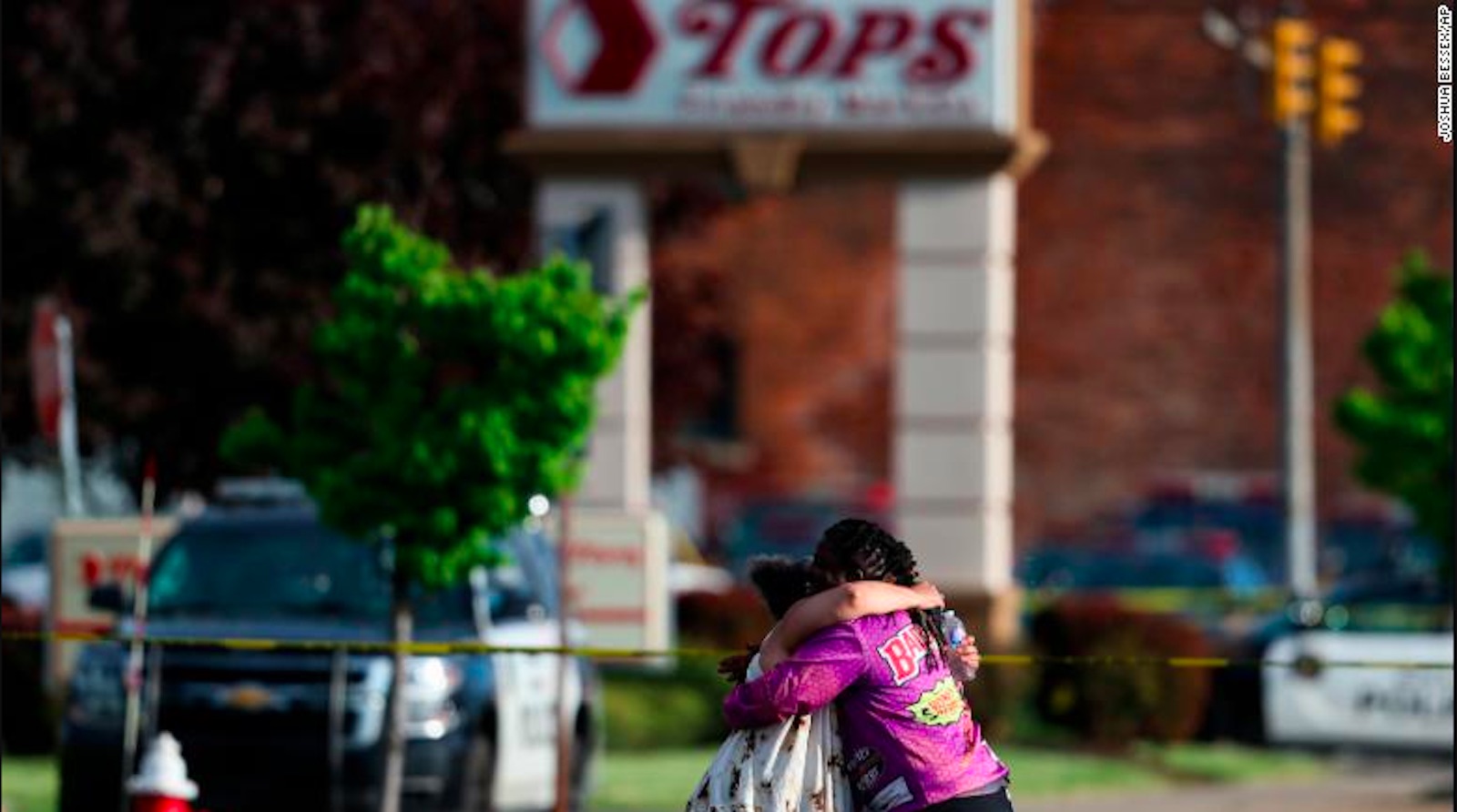 Governor of New York speaks about the publications of the suspect of the 4:53

(CNN) — The massacre this weekend in buffaloNew York, is the most terrifying evidence yet of a serious threat from a wave of white supremacist terrorisma seething and hateful ideology festering on the internet and adding a new layer of fear to a dangerous and divisive era.

The massacre of 10 innocent people at a grocery store, an attack allegedly targeting a majority black neighborhood, by an 18 year old apparently steeped in the racist theory of white ethnic and cultural replacement, it’s horrible enough and was just one of the mass gun tragedies that are themselves all too common in America, several of which were reported this weekend. week.

But the details emerging about the Buffalo suspect’s depraved racial motivations are the latest sign that the country’s poisoned politics are not only incapable of preventing such evil and the seemingly endless carnage caused by gun violence. It is actively worsening the situation, so much so that a group of black people were even shot to death while doing their shopping this Saturday.

More than half a century since the greatest achievements of the civil rights movement and nearly a decade and a half since the election of the first black president, a growing list of murders motivated by racial rage—not only against blacks but also against Jews and Hispanics—seems to portend a terrifying new passage in history in a nation that is internally divided.

This reality set off a day of agony and mourning in Buffalo and in minority communities across the country this Sunday.

“Someone drove from hundreds of miles awaysomeone who was not from this community, who did not know this community, who came here to take as many black lives as possible, who did this deliberately and premeditated,” Buffalo Mayor Byron Brown said on “Face the Nation” on CBS.

Suspect in supermarket shooting was not from Buffalo 0:23

There will be claims that the Buffalo shooting was an isolated incident perpetrated by a sick extremist. But it is getting harder and harder to make such arguments. The 2015 massacre of worshipers at a black church in Charleston, South Carolina; the 2018 mass shooting at a synagogue in Pittsburgh, and the 2019 killings at a Walmart in El Paso, Texas, were also motivated by racial hatred.

For example, what level of culpability is there for conservative media networks that present prime-time inflammatory material such as the “Great Replacement Theory,” which alleges that there is an organized plot to replace white Americans with black, Hispanic, and American voters? Jews? That line of racial subversion appears to have influenced Buffalo suspect Payton Gendron, according to police and a copy of what appears to be his 180-page manifesto, obtained by CNN.

In the document, attributed to Gendron, he discusses his perception of the declining size of the white population and claims of ethnic and cultural replacement of whites. An official familiar with the investigation said Gendron, charged with first-degree murder, made hateful statements toward the black community after his arrest. Investigators also uncovered other information from search warrants and other methods that indicated the alleged shooter was “studying” previous hate attacks and shootings.

Witness describes how he experienced the shooting in a Buffalo supermarket 1:04

While there is no evidence so far that the Buffalo shooter had a partisan motive, the attack came at a time when racial demagoguery and ambiguity about white extremism have seeped into politics, fomented by politicians like Mr. former president Donald Trump.

And the massacre plunges social media companies, into whose networks that hate sometimes seeps, back into a fierce controversy over the extent to which freedom of expression should be regulated to avoid promoting an extremist ideology that kills.

“This spreads like a virus. And that’s why I’m calling on the CEOs of all social media platforms to look at their policies so they can look me in the eye and tell me that everything is being done to make sure Please keep this information from spreading,” New York Democratic Governor Kathy Hochul said on CNN’s “State of the Union” on Sunday.

“They need to be able to identify when information like this comes in, when it hits the platform, and it needs to be removed because it’s spreading like wildfire. These theories that result in the radicalization of a young person sitting at home are very scary.” And it’s something you have to deal with.”

The Buffalo shooting also triggered the familiar and futile ritual of politicians offering prayers for the victims, accompanied by Democratic gun control demands and Republican obfuscation over the question of whether guns like the one used in Saturday’s attack should be legal. .

Nothing that has happened since the shooter broke into the supermarket suggests that moderate and limited reforms to the gun law have any chance of getting around the GOP logjam caused by Senate filibuster. Some Democrats might also prefer not to vote on gun control measures in a midterm election year. So there’s every reason to believe Buffalo will join other cities whose names will become emblems of the country’s unwillingness to come to an agreement on how to prevent mass shootings.

A weekend of terror with guns in the US

While the Buffalo attack was the most horrific outburst of gun violence this weekend, it was far from the only bloodshed of its kind. Several people were shot at a church in the county of Orange, California. As many as 20 people were shot just hours apart in several bursts of gunfire in Milwaukee on Friday night near an NBA Playoffs game. In Chicago on Saturday night, a 16-year-old was shot and killed near “The Bean” public art exhibit in Millennium Park.

America is suffering in more ways than one, and the horror in Buffalo is likely to exacerbate the feelings of insecurity, in all its forms, that many Americans are experiencing.

Parents can’t find baby formula. High inflation, which has caused food prices to soar and almost daily records set in the cost of a gallon of gasoline, is making life miserable for millions of Americans. He, too, has confounded the White House’s initial diagnosis that the high cost of living was a “transient” result of the pandemic and most of its efforts to ease the pressure.

More than two years of successive waves of Covid-19 have killed a million people in the US., have left many more exhausted and opened up new political divisions over vaccines and mask-wearing in a nation that appears to be splitting into conservative and liberal tribes. And the scars of the attack on the US Capitol on January 6, 2021, are being felt in this year’s midterm elections, as Republican candidates whitewash what happened that day while repeating Trump’s lies about an election. stolen.

The current stormy political mood may be the rule rather than the exception, but the acrimony and division is about to get even worse as the Supreme Court is expected to deliver a major ruling on abortion in the coming weeks. Abortion rights marches across the country this weekend, in response to the draft opinion that would overturn Roe v. Wade, underscored how the country is on the cusp of another great battle. If the final ruling destroys abortion rights across the country and the issue is handed back to the states, cultural divisions between red and blue states and cities and rural areas will ensure it is a decades-long fight.

Thousands marched in Washington to protect the right to abortion 3:14

The existential dispute between the liberal and conservative visions of the country takes place in a feverish atmosphere deliberately fomented by Trump for his own political benefit. The former president’s lies about electoral fraud and his attempted coup to stay in power have poisoned the political process and made this moment in history even more fragile. His likely 2024 presidential campaign could bring the country ever closer to a breaking point, further straining racial and social cohesion.

President Joe Biden, who was motivated to run in part by disgust that Trump blamed “both sides” for the violence at the 2017 white supremacist march in Charlottesville, Virginia, condemned the motivations behind the attack in Buffalo.

“We must all work together to address the hatred that remains a stain on America’s soul. Our hearts are heavy once again, but our resolve must never waver,” the president said at the National Officers’ Memorial Service. Peace on Sunday.

Biden and first lady Jill Biden plan to travel to Buffalo to meet with the families of the shooting victims on Tuesday, a White House official said. The visit will likely bring back memories of then-President Barack Obama’s moving visit to Charleston, when he joined in singing “Amazing Grace” during a eulogy for the Rev. Clementa Pinckney, who was killed in the 2015 massacre.

Biden does not share Obama’s eloquence or historical significance as a barrier breaker. And seven years later, amid the political upheavals that have ensued since then, he faces an even more difficult task of bringing a fractured nation back to common ground.

The man found burned in the trunk of his car identified