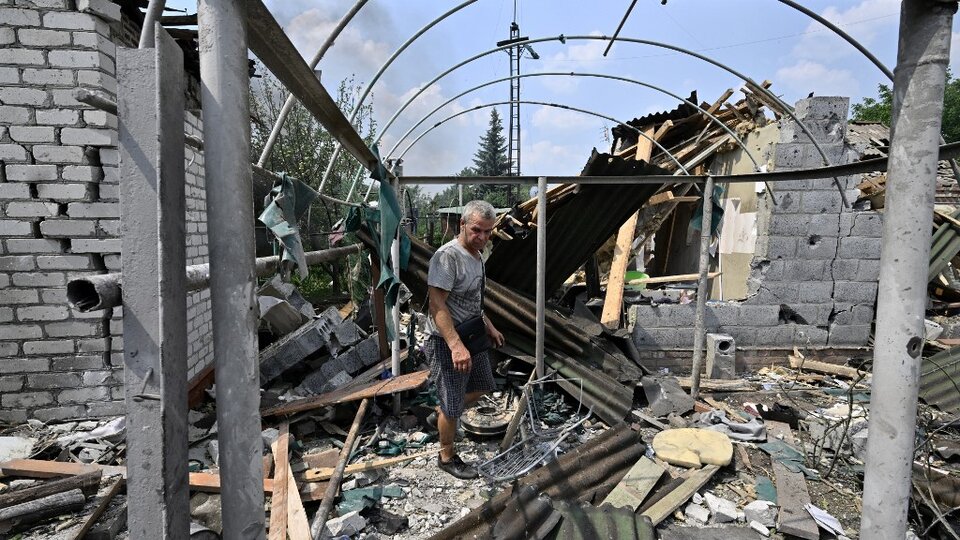 The governor of the Russian region of Kursk, bordering Ukraine, Román Starovoit, today denounced a Ukrainian attack with artillery fire against several towns, without causing any casualties among the population.

“The morning began with artillery fire attacks on several border towns in the Glushkovski district,” Starovoit wrote on his Telegram account.

He added that impacts were detected in the village of Markovo and that “shells exploded again in the town of Tiótkino.”

“According to preliminary data, there were no victims. In the village of Popovo-Lezhachí, several houses suffered damage to their facades and glass breakage,” the governor said.

The President of Ukraine, Volodymyr Zelensky, affirmed on Tuesday that Russia could invade another state and denounced again that it is using Belarusian soil to launch missiles against his country.

“No one can rule out a new Russian invasion of another neighboring country. Such an eventuality is possible,” Zelensky warned in an online speech at the start of The Economist’s annual conference near Athens.

The Ukrainian leader stressed that Russia is looking for “space” to apply new anti-democratic tactics and recalled that already in 2014 (with the invasion of Crimea) it avoided giving security guarantees through dialogue.

For this reason, he added, Europe needs more security and solidarity than ever.

Proof of his belligerent intentions is the fact that Russia is launching missiles “of various calibers” from Belarusian territory, something about which Zelensky left no room for doubt.

Russian Defense Minister Sergei Shoigu said today that some of the Western weapons supplied by the West to Ukraine are reaching the Middle East and the black market.

“According to available information, some of the foreign weapons that the West supplies to Ukraine are reaching the Middle East region and also ending up on the black market,” he told a teleconference at his ministry.

According to Shoigu, the West has so far delivered more than 28,000 tons of military cargo to kyiv.

In his opinion, “the West wants to prolong the conflict in Ukraine”, which is why it continues to deliver weapons to that country.

The secretary of the Russian Security Council, Nikolai Patrushev, affirmed today that the objectives of the “special military operation” in Ukraine will be fulfilled despite the increase in military aid to the kyiv government.

“Despite the military aid from the United States and the West to Ukraine, the increase in supplies of lethal weapons, the objectives (of the “operation”) will be fulfilled,” Patrushev was quoted as saying by the Interfax agency at a meeting on national security. in the city of Khabarovsk, in the far east of the country.

He insisted that Russia in Ukraine seeks to “defend the people from the genocide carried out by the Ukrainian neo-Nazi regime, demilitarize and denazify the territory of Ukraine, and achieve its neutral status.”

In his speech, Patrushev attacked the US, which he accused of “betting on the weakening and oppression of Russia for the sake of its dominance and the preservation of the political-military superiority it obtained at the end of the last century.”

Russia reported today that it is investigating allegations of torture of Russian soldiers captured by Ukrainian forces and released during a prisoner exchange with the neighboring country.

“The Russian investigative committee verifies the facts of inhuman treatment of Russian soldiers imprisoned in Ukraine,” the body in charge of criminal investigations in Russia said in a statement.

Russia and Ukraine have carried out several prisoner-of-war exchanges since the Russian offensive against their neighbor on February 24.

The most recent dates back to June 29 and affected 144 Ukrainians and as many on the Russian side, reported the AFP news agency.

Some of the Russians released on that occasion reported “numerous acts of violence they had suffered” during their detention, according to the statement, referring to beatings, torture with electricity or even being deprived of water or food.

NATO ratified the accession demands of Sweden and Finland

The North Atlantic Treaty Organization (NATO) today formally launched the ratification process for the accession requests of Sweden and Finlandwhich continues to be rejected by Turkey, in addition to being one of the claims that Russia places among the main foundations of its invasion of Ukraine.

“It’s a good day for Sweden and Finland, and a good day for NATO,” Atlantic Alliance Secretary General Jens Stoltenberg said at the start of the ceremony. Today we will formally sign the accession protocols. This marks the beginning of the ratification process.”

According to Stoltenberg, “with 32 nations around the table, we will be even stronger, and our people even safer, as we face the biggest security crisis in decades.”

La Otanadded the Norwegian official, “remains open to European democracies that are ready and willing to contribute to our collective security”.

For his part, Finnish Foreign Minister Pekka Haavisto thanked the “alliance’s support for Finland’s membership, and we look forward to a fast ratification process.”

Swedish Foreign Minister Ann Linde said in turn that “the signing of the accession protocols is an important step towards our full membership. The next phase will be the ratification process in each of the allied countries.”

In the Kharkov region, in northeastern Ukraine, Russian troops “are concentrating their main efforts on keeping the lines occupied and preventing the advance of Ukrainian troops”.

In that region, “the Russians bombarded the areas of the Kutuzivka, Nove, Ruski Tyshky, Mala Danylivka and Dementiivka settlements with artillery, multiple rocket launchers and tanks, and also launched an air attack on the city of Kharkov.”

Meanwhile, Ukrainian air force, missile and artillery units continue to attack ammunition depots and groups of enemy manpower and equipment, particularly in the Kherson region, in the south of the country and partially occupied by the Russians.

However, according to the Ukrainian General Staff, Russian soldiers “are demoralized and look for any opportunity to suffer minor injuries. They resort to self-mutilation and simulations to guarantee themselves sick leave and return to Russia alive,” the General Staff added.

Another offensive attempt in Donetsk

Russian forces have made another offensive attempt in the Donetsk regionnear the towns of Spirne and Novoluhanske.

Lugansk and Donetsk make up Donbas, a pro-Russian enclave that has become the Moscow’s priority objective in trying to establish a corridor linking eastern Ukraine with the Crimean peninsulaoccupied by the Russians since 2014, and other southern areas that they have also conquered.

In Donetsk, the Russians maintain their strategy of controlling the city of Sloviansk and its surroundings, an enclave that had some 100,000 inhabitants before the invasion, of which no more than 25,000 currently remain, according to their authorities.

The area is attacked with missiles and artillery fire.

“The main efforts of the enemy are focused on establishing control over the territory of the Luhansk region within its (already conquered) administrative borders. The enemy is taking measures to restore the logistics infrastructure in its rear,” the General Staff added.