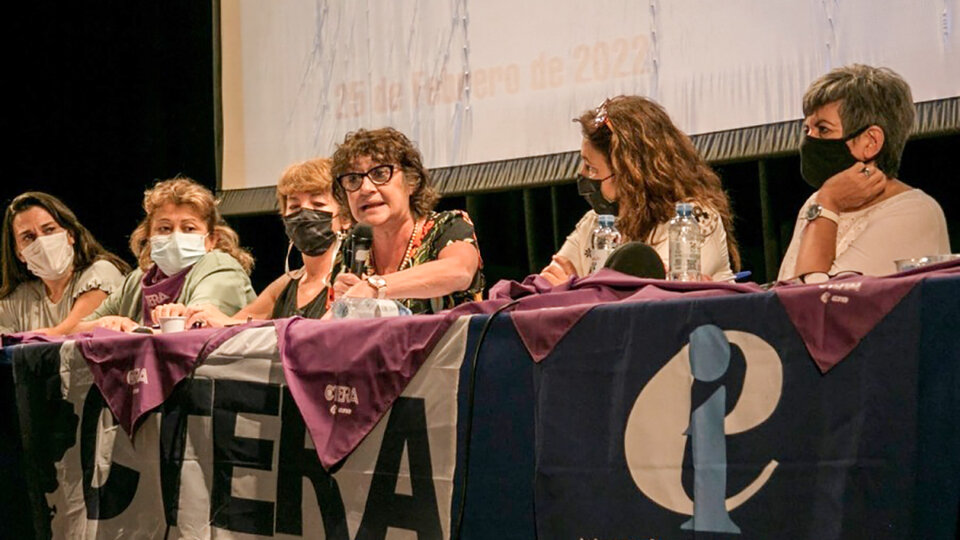 There is an agreement in the Paritaria Nacional Docente. The national teachers unions accepted the salary offer proposed in the last meeting by the national government. This is an increase of 45.46 percent, which means that the initial salary (that of a teacher without seniority) will go from the current 41,250 pesos to 50 thousand pesos in March and 60 thousand will arrive in September. That month the negotiation will be reopened to evaluate the inflation data. “The salary proposal was approved by a majority since it was taken into consideration that there will be monitoring of the salary,” he told Page 12, the general secretary of Ctera, Sonia Alesso. Meanwhile, the Minister of Education Jaime Perczyk He affirmed that the Government’s commitment is that “the wages of the workers not only beat inflation but also recover. And we are complying with it.”

In this way, the teachers of the country will have an increase in the initial salary of the total of 45.46 percent. It will be paid in four installments during the course of the year, in March (21.21 percent), June (8.08 percent), August (8.08 percent) and September (8.08 percent). In September there will be an opening to evaluate the inflation data. In addition, the same increase percentages will be applied to the amount that teachers receive through the Incentive Fund (Fonid).

The teacher incentive is a sum charged by all education workers, for the same amount, to raise wages. The offer of the national government is to recompose it and also increase the additional for Connectivity. Added, Fonid and Connectivity will go to 6,157 pesos in March, with monthly increases until September, when both items will mean 7,391 pesos.

As for the mechanism of salary reviewa follow-up commission will be formed and the impact that inflation has on them.

The acceptance of the salary offer at the national level was voted on this Friday during a national congress convened by Ctera –one of the majority unions in the teaching sector–. The meeting was held at the headquarters of the Foetra union, located at Hipólito Yrigoyen 3171, in the Balvanera neighborhood of Buenos Aires, and representatives of all the teachers’ union groups that make up Ctera participated.

“We approved a proposal of 45.46 percent that promises to monitor the salary in the month of September. In addition, it includes the discussion of the framework agreement and the subject of teacher training that seems important to us”pointed out to this newspaper, the head of Ctera, Alesso.

Also, Aleso He stressed that the union congress not only discussed increases in the starting salary and the teacher incentive, but also highlighted “the commitment and dedication of teachers across the country in the hard years of the pandemic”. “Another important issue is the vaccination”, he added, celebrating the existence of the vaccine to be able to “return to full attendance”.

After the acceptance and signing of the salary agreement, the Minister of National Education, Jaime Perczyk, pointed out: “Since this government took office, we have committed ourselves so that the wages of the workers not only beat inflation but also recover. That was the commitment of the President of the Nation and the one that we fulfilled with this proposal that we made nine days before classes begin and that has now been accepted for all teachers”.

From sadop they also signed the salary agreement and highlighted the continuity of the Training Our School, which guarantees free, universal and in-service training for teachers in the country. “The signed agreement has pedagogical value but above all a labor value, considering that training is part of the CyMAT, and guarantees better living and health conditions for all” they highlighted from the union.

Main Buenos Aires teachers’ unions also accepted the salary offer from the Axel Kicillof government. The Buenos Aires Teaching Unity Front made up of Suteba, FEB, UDA, Amet and Sadop, decided to accept the proposed salary increase of 42 percent in 3 sections, which takes the initial salary without seniority from $55,110.7 to $65,006.3 in March, $71,070.3 in July and $78,549.3 in September.

“The agreement that has been reached aims to keep the teacher’s salary above the inflation rate, while continuing with the progressive recomposition of the purchasing power lost in previous years, a demand raised by the FUDB since the beginning of the negotiations” , pointed out from the Bonaerense Teaching Unity Front.

Agricultural show: the war in Ukraine “will last”, warns Macron who convenes a Defense Council