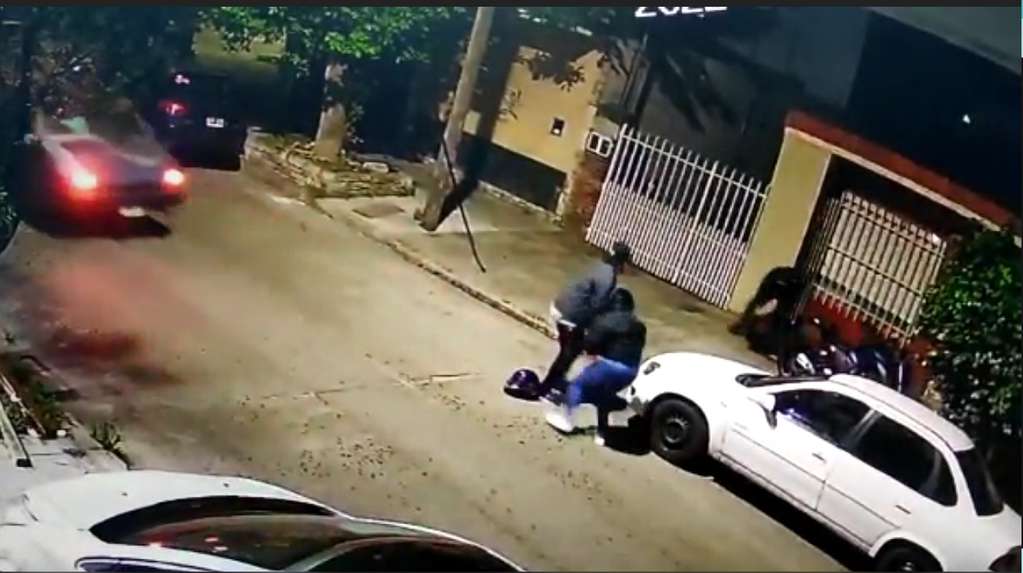 three criminals murdered a Federal Police in the Buenos Aires town of San Martín in a itent of asault. The victim, identified as Giuliano Tierro, lived in Tucumán and was on vacation in Buenos Aires.

The police officer was with his wife at the time the thieves tried to rob him, after they had agreed to buy and sell a cell phone through an app.

I also read: Video: motojets tried to assault a retiree and the man defended himself with a broomstick

Police sources reported that the couple residing in Tucumán was located at 1583 Francisco Madero Street, waiting for meet user “Dani Diglio” with whom they had agreed -through the marketplace platform- to purchase a cell phone.

The video shows how, after waiting a few minutes, the criminals intercept them from behind. The woman gave him all the belongings, while the man resisted and entered into a confrontation with one of the criminals, without letting him escape.

The moment in which the robbery and aggression happens. (Video: Federal Police)

While the two companions waited for him to flee through the same place they had arrived, the offender caught started a shootout with the cop that was on the floor.

Giuliano Tierro fired only two shots, while the robber standing eight bullets hit him in the body. After shooting him, the murderer fled on foot in the direction of his companions.

I also read: A man hit his ex-partner and shot his baby in the head: he is on the run

The man who works as a sub-inspector in Tucumán entered the Carrillo Hospital alive, but after a few minutes He died at 8:20 p.m. this Wednesday from the eight bullet wounds that he had on his chest, body and arms.

One of the neighbors, identified as Peter Alban Molin, who came out upon hearing the shooting and was shot. This is a Bolivian retiree who was transferred to a hospital and he is out of danger.

I also read: A man attacked his father with an ax who defended himself with a shotgun: he almost killed him

The prosecutor Correa from the Intervening Prosecutor’s Office is investigating the case, who automatically arranged for experts from the body, survey of cameraswitnesses and rigorous proceedings.