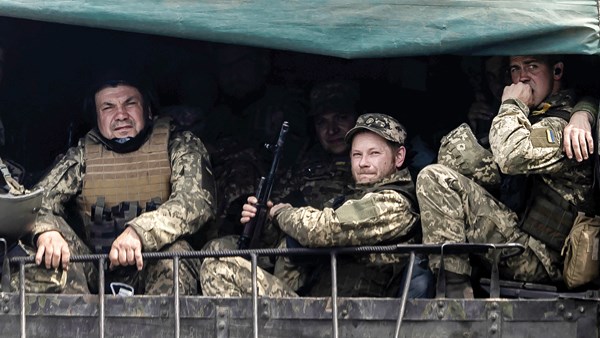 Ukrainian President Volodymyr Zelensky announced yesterday that only diplomatic means can end hostilities in Ukraine, while Moscow continues its offensive in the east of the country.
But Zelensky considered that any alternative to Ukraine’s candidacy for membership in the European Union would be a “compromise” with Russia, in his response to the “European Political Organization” project proposed by his French counterpart Emmanuel Macron.
“We do not need alternatives to Ukraine’s candidacy for EU membership, and we do not need such compromises,” Zelensky said at a press conference in Kyiv with Portuguese Prime Minister Antonio Costa.
He added: “Because, honestly, there will be no settlements with Ukraine in relation to Europe, it will be another concession between Europe and Russia, and I am absolutely sure of that.. It is the influence and political and diplomatic pressure that Russian officials and lobbyists exert on the decision of European countries to support Ukraine or not”.
French President Emmanuel Macron presented the “European Political Organization” project on May 9 before the European Parliament in Strasbourg, eastern France, in the midst of discussing launching the accession process for Ukraine, which has been under Russian attack since February 24.
But he made it clear that the mechanism of accession to the European Union presented by Kyiv would take “decades”, proposing in parallel the creation of a “new European organization” that Ukraine would join and could include Britain, which left the European Union in 2020, or Moldova.
This project, which is scheduled to be discussed at a European summit scheduled for the end of June, has been criticized by some leaders, such as Lithuanian President Gitanas Nosida, who considered that it reflects a lack of desire to quickly include Ukraine in the European Union.
Meanwhile, Zelensky stressed during an interview with a Ukrainian television station, “The end of the conflict will be diplomatic, pointing out that the military battles will be bloody, but they will definitely end through diplomatic means.”
He continued, “There will inevitably be talks between Ukraine and Russia, I don’t know what their shape will be: through mediators, without mediators, within an expanded circle, at the presidential level.”
For his part, Russian President Vladimir Putin is seeking to confront the financial sanctions imposed on him by the West, with an emphasis on the demand of Russian gas importers to pay in rubles.
Yesterday, the Russian “Gazprom” group suspended supplies of natural gas to Finland for rejecting these conditions.
“Natural gas supplies to Finland have been suspended within the framework of the Gazum contract,” the Finnish public company, Gazum, announced in a statement, adding that other sources will provide gas via the Balticconnector pipeline connecting Finland with Estonia. Gazprom confirmed the halt in supplies.
Thus, the northern country, which angered Moscow with its decision to join NATO, joins Poland and Bulgaria, which Gazprom cut off gas from for refusing to pay in rubles, in compliance with Moscow’s request issued in April.
Moscow has previously cut off Russian electricity supplies to Finland since mid-May.