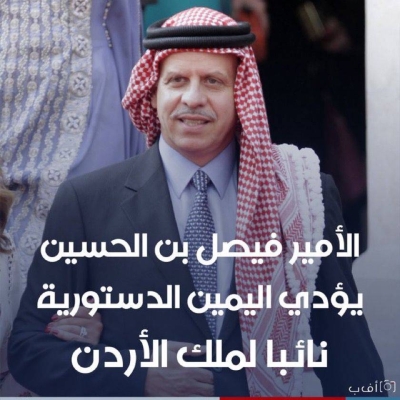 Al-Marsad newspaper: Sources revealed the reason why Jordan’s King Abdullah chose his brother Prince Faisal to be his deputy, despite the fact that Jordan’s Crown Prince Al-Hussein bin Abdullah was sworn in a while ago as deputy king.

Professor of constitutional law Noufan Al-Ajarmeh said, according to Al-Hurra: “What happened is a routine procedure, where the king, when traveling outside the country, chooses one of his brothers or the crown prince, and he must take the constitutional oath before the Council of Ministers.”

He continued, “It is customary to choose the crown prince for this assignment, but perhaps the latter will accompany the king on his travels abroad.”

Jordanian writer Malek Al-Athamneh added: “In the event of the king’s absence, even if any of the princes deputizes for hours, in order to prevent a constitutional vacuum, the deputy is not necessarily the crown prince.”

He pointed out that the powers of the Viceroy are very restricted in managing the day-to-day work. As soon as the king returns, the mandate falls.

It is worth noting that King Abdullah is scheduled to attend a summit in Jeddah this month, during which US President Joe Biden will meet with leaders of the Gulf Cooperation Council, Iraq and Egypt.

The “cave” of the demon fox queen Daji has been dug! The 3,000-year secret history reveals that King Zhou treated her like this | Novelty | Sanli News Network SETN.COM

Boston Club in Dusseldorf has been around for 110 years