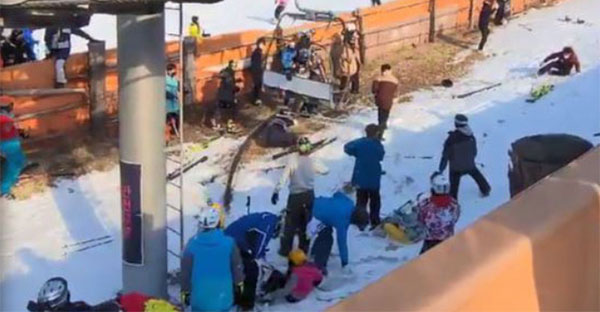 Bearstown Rift Reversing Accident. yunhap newsAt around 3 pm on the 22nd, at Bears Town Ski Resort in Pocheon-si, Gyeonggi-do, a lift that was going up to the top of the slope suddenly reversed.

At that time, the lift on the advanced ski slope seemed to stop, but suddenly it ran backwards at a high speed, and the passengers screamed and trembled in fear.

Some passengers, fearing a collision as they reached the boarding and disembarkation point, threw off their skis and jumped to the ground or got caught between the lifts, but the severity of the injuries is not said to be serious.

A 7-year-old child suffered bruises in the accident and was taken to hospital for treatment.

The lift stopped running after running in reverse for more than a minute. There were 100 people on board at the time, excluding those who escaped from the lift. Of these, 39 came down on their own. The remaining 61 people escaped through ropes installed by the 119 rescue team.

Some passengers shivered in fear and cold on the lift for over two hours.

Fire authorities installed an emergency medical center equipped with hot packs and blankets at the scene to check the health of the rescued passengers.

The police plan to openly investigate the possibility of malfunctions or manipulation errors due to mechanical defects, and criminal punishment will be given if negligence is revealed.