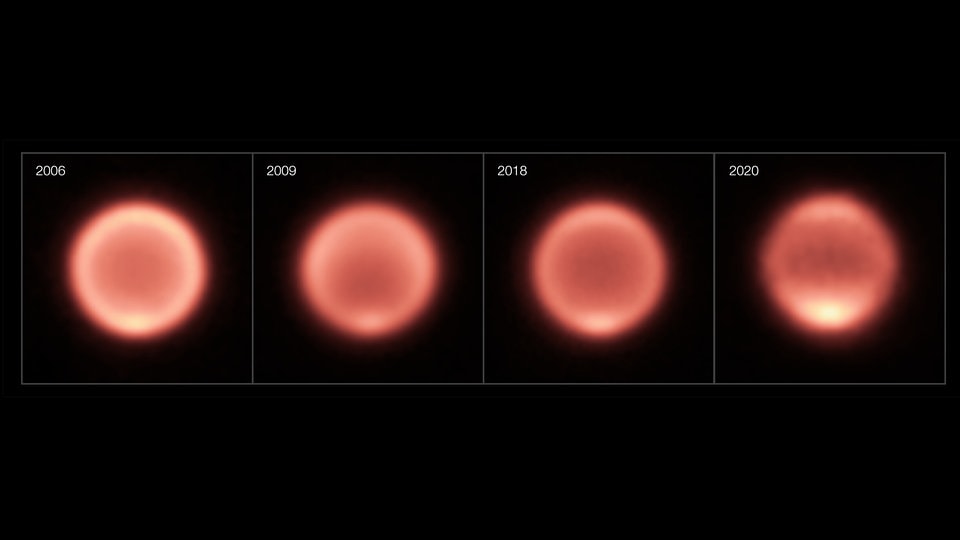 Astronomers from the European Southern Observatory have measured unexpected temperature changes on Neptune. Between 2003 and 2018, the global average temperature on the ice giant fell by eight degrees Celsius, writes a team led by Michael Roman from the University of Leicester and Glenn Orton from the Jet Propulsion Laboratory in the Planetary Science Journal. But at the South Pole itself, temperatures rose by 11 degrees Celsius between 2018 and 2020. These changes surprised the scientists.

Surprising rise in temperature at the South Pole

Of the planets in the solar system known to date, Neptune is the furthest out. It orbits the star at a distance of about 30 times that of Earth and is freezing cold: the atmosphere, which consists mainly of hydrogen, helium and methane, has an average temperature of -220 degrees Celsius. But like on Earth, temperatures fluctuate with the seasons. With the difference that a Neptune year, i.e. one orbit around the sun, lasts 165 Earth years.

It has been summer in the southern hemisphere since 2005. A team of astronomers has been taking thermal images of the planet for the 17 years since, using the best telescopes on Earth. These show that the planet cooled by 2018. In the last two years, there has been a surprising jump in temperature at the South Pole. “Our data cover less than half of a Neptune season, so nobody expected to see big and rapid changes,” says co-author Glenn Orton.

So far, the researchers have no explanation for the sharp fluctuations. Fluctuations in stratospheric chemistry, random weather patterns or changes caused by the solar cycle are possible. This should now show further data that are to be collected in the coming years.

In addition to the Very Large Telescope (VLT) of the European Southern Observatory, the Subaru, Keck and Gemini South and North telescopes were also involved in the investigation. The researchers also used data from NASA’s Spitzer Space Telescope.