Darangin paddy fields where rice is cultivated layer by layer along the mountain slope.

This is Musugol, Dobong-gu, where the last remaining Darangin rice fields in Seoul are located.

Paddy fields not only make rice, the staple food of Koreans, but also play a very important ecological and environmental role.

However, the area is rapidly decreasing.

We covered the diminishing value of discussion.

It is only 1.5 kilometers from Dobong Station on Subway Line 1 in the metropolitan area.

A yellow rice paddy stands out below Dobongsan Mountain.

In a paddy field of about 1,400 pyeong, Mr. Lee Seok-hyeon has been cultivating rice using valley water for generations.

“The people who see ‘Hey, this rice is already ripe and yellow’ really enjoyed it.”

It’s not just good for people.

This small rice paddy on the mountainside is now a precious home for small creatures that are hard to find.

A mountain shellfish that lives only in the clear waters of deep mountains.

However, the paddy fields are rapidly shrinking.

A rural landscape overlooking the National Assembly building in the distance.

A rice paddy field that can be easily seen even in Seoul.

Compared to 1980, the area of ​​paddy fields last year decreased by nearly half.

The decrease in rice consumption is the main reason.

During the same period, per capita rice consumption fell by more than half from 132.7 kilograms to 56.9 kilograms.

A wide field near Gimpo Airport.

It is the closest large-scale agricultural land to Seoul, but construction will start next year here too.

“For those who have been farming for more than 50 to 60 years, all their memories are disappearing. Another concern is now about their livelihood…”

A puddle of water we encountered while walking along the rice paddy field.

A little frog is resting halfway to the surface of the water.

It is an endangered wildlife class II gold frog.

People and wild animals that have been guarding this place for many years have to leave as if they were driven out.

Recently, as the importance of carbon neutrality has been emphasized, the role of paddy fields has become more prominent, but metallurgical paddy fields continue to be covered with concrete.

“(Depending on the amount of rice) it absorbs a lot of carbon and makes oxygen again. It can play a huge role in improving air quality or reducing heat waves…”

The rapid decline of rice fields is also raising concerns in terms of food security.

Excluding rice, it is only about 10%.

“If there is a shortage of supplies, first priority is to secure food in their own country (importing is difficult)/ If farmland is lost, eventually food cannot be produced.”

This year is the last time you can see golden fields swaying like waves in the wind in Daejang-dong, Bucheon, Gyeonggi-do.

An autumn field that was a symbol of abundance.

Would our lives be enriched if we built apartments here and laid out roads?

This is Kim Min-wook from MBC News.

In Seoul, house prices plummeted by hundreds of millions of won. This is because only stocks for sale with lower prices are being made as the buying trend has contracted due to concerns over the economic slowdown, interest rate hikes, and trading cliffs. As the actual transaction price was formed mainly on first-time sales, which fell by hundreds of millions of won, the prices of some complexes returned to before 2020, just before the real estate bubble occurred.

According to a survey by the Korea Real Estate Agency on the 6th, apartment prices in Seoul this week recorded -0.20%, a sharp decrease from the previous week (-0.19%). It is the biggest drop in 9 years and 10 months since December 3, 2012 (-0.21%). Apartment prices in Seoul have recorded negative fluctuations for the 19th week since the last week of May (-0.01%) survey.

The decline continued in the ‘No-Do-Gang’ areas, where low- and mid-priced apartments were concentrated. In Dobong-gu (-0.37%), the decline was mainly focused on the construction of Dobong and Chang-dong, and in Nowon-gu (-0.36%), the decline was widened mainly in Sanggye, Junggye, and Wolgye-dong. Gangbuk-gu also fell 0.16% this week.

Incheon and Gyeonggi fell 0.31% and 0.26%, respectively, from the previous week. This is because the price gap between buyers and sellers has widened due to concerns over a decline in the real estate market, and trading mainly in complexes that have plummeted.

Despite the autumn moving season, the jeonse market also continues to be weak. This week, the Seoul Jeonse price fell 0.20%, a bigger drop than last week’s (-0.18%). It was the biggest decline since the third week of February 2019 (-0.22%).

The Korea Real Estate Agency said, “The demand for new jeonse is declining sharply due to the burden of interest on jeonse loans due to interest rate hikes and the preference for reversal and renewal contracts.” seems to be,” he said.

Goo Hye-sun, who became chubby, confessed to herself, “I have gained weight because of my heart.”

Actress Ku Hye-sun directly revealed the reason for her change of appearance from before.

Ku Hye-sun attended the 27th Chunsa International Film Festival held at Sowol Art Hall in Seongdong-gu, Seoul on the 30th of last month as a film director. On this day, she stood in front of her red carpet photo wall wearing a checkered jacket, mini skirt and fedora hat.

However, after appearing in the media after a long time, he attracted attention with a somewhat plump appearance than before. Goo Hye-sun’s changed current situation has even raised rumors about her health.

Goo Hye-sun did not reveal why she suffered. However, he recently reported that his long-time companion dog ‘Potato’ passed away, so speculation is coming out that it might be sad.

On the 14th of last month, on SNS, Goo Hye-sun said, “The angel ‘Potato’, who was my everything, went to heaven a month ago. 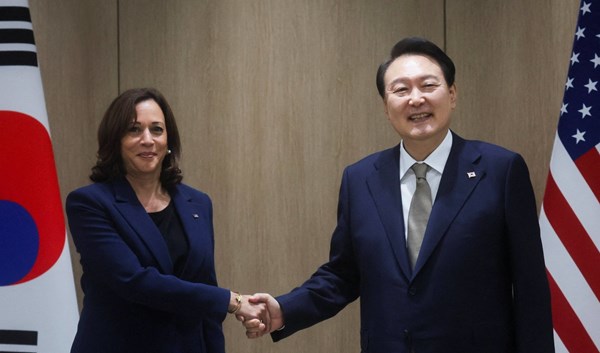 Harris: Fears of war between the two Koreas exist..and are ready to defend Seoul

US Vice President Kamala Harris warns of fears of a war between the two Koreas, and affirms Washington’s support and readiness to defend Seoul.

US Vice President Kamala Harris warned today, Thursday, of fears of a war between North and South Korea, in the… Your first visit to the demilitarized zone on the inter-Korean border.

“Fears of war remain, and the United States and South Korea are fully prepared to respond to any emergency,” Harris said, stressing that “their country’s commitment to defending South Korea is firm and strong.”

The US Vice President expressed “the desire of Washington and the entire world for peace and stability to prevail on the entire Korean peninsula without any North Korean threats.”

Harris and South Korean President Yoon Suk-Yul discussed several files, including the long-term security alliance between the two countries, and the strengthening of their economic and technological partnership, in addition to a range of other regional and global issues.

In this context, a White House official clarified that Harris’ visit demonstrates US commitment to stand by South Korea in the face of any threats” from North Korea, adding that Harris would honor “the joint sacrifices of American and Korean soldiers” who died in the Korean War, which ended with a ceasefire that marked the division of the peninsula in 1953.

A few days ago, the two countries announced a measure Their first joint naval exercise in 5 years near the Korean Peninsula. “The exercises were prepared to demonstrate the strong determination of the alliance between South Korea and the United States to respond to North Korean moves,” Seoul commented.

Earlier in the day, the Japan Maritime Self-Defense Force reported that The Japanese, US and South Korean navies will participate in the exercises A joint military exercise will take place on Friday, indicating that the maneuvers include anti-submarine exercises, and will be conducted in the Sea of ​​Japan. 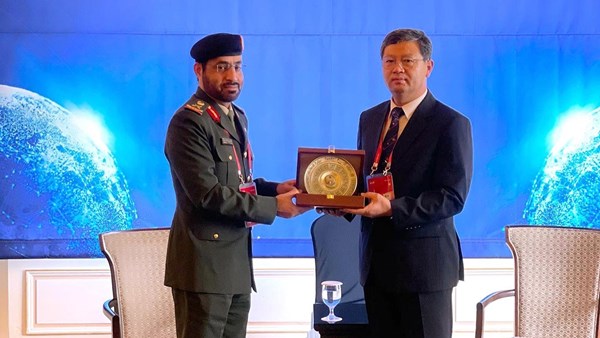 Major General Dr. Mubarak Saeed bin Ghafan Al Jabri, Assistant Undersecretary for Support and Defense Industries, and his accompanying delegation of senior Ministry of Defense officers participated in the “Seoul Defense Dialogue 2022” – the annual International Security Forum – in its tenth session, which was organized by the Ministry of Defense in the Republic of South Korea.
A number of senior government officials and civilian experts in the field of security and defense from 54 countries also participated in the forum, which lasted for three days, to discuss various current global security issues.
On the sidelines of the forum, Major General Dr. Mubarak Saeed Gafan Al-Jabri met with H.E Dong Hwan, Minister of the Korean Acquisition Agency, and Yoo Dong-jun, Deputy Minister of Defense of Korea in charge of the Military Forces and Resources Management Office.
The meetings dealt with a number of issues of common interest, and the two sides emphasized the depth of the historical relationship between the two countries, especially in the defense and security field, and the importance of strengthening aspects of cooperation and the distinguished strategic partnership between the UAE and the Republic of South Korea, and ways to enhance and develop them to serve the national interests of the two friendly countries.

Stray Kids will make a comeback with their new album “MAXIDENT” on October 7 at 1:00 pm (0:00 EST). At 0:00 on the 6th, Stray Kids released the teaser video through their SNS account.

The trailer adds to the anticipation of the well-produced new mini-album. Walking through the heart of New York City, enjoying a free-spirited routine, the Stray Kids receive a mysterious phone call and realize something big has happened. In a clearly different atmosphere from the previous scene, the unidentified heart-shaped monster that appeared in front of them disrupted their leisurely daily life and started a reversal. What is the meaning of this reversal, and the music and concepts they will show arouse great curiosity.

Previously, Stray Kids topped the US billboard chart “Billboard 200” with the album “ODDINARY” released on March 18 this year, creating the third record in the history of K-pop artists. The title song ‘MANIAC’ surpassed 100 million times on the global music distribution platform ‘sportify’ as of August 31, proving its global popularity.

Stray Kids has created its own music based on the in-group production team “3RACHA” composed of Fang Can, Seo Changbin, and Han Jicheng, and established a unique integrity. It conveyed a strong impact to fans at home and abroad and became a trend. Recently, they have successfully held their second world tour “MANIAC” with a total of 21 performances in 9 cities, expanding their foothold.

In addition, Stray Kids will hold ‘Stry Kids World Tour ‘MANIAC’ Seoul Special Concert (UNVEIL 11)’ at KSPO dome (Old Gymnastics Arena) in Songpa-gu, Seoul from the 17th to the 18th of this month. This solo concert, which is even more meaningful because Stray Kids entered the KSPO dome for the first time, was completely sold out after the general pre-sale started, and Stray Kids once again showed a strong box office appeal after the second world tour.

Stray Kids will once again capture the hearts of fans around the world with its high-quality mini-album ‘MAXIDENT’ to be released on October 7th. JYP Entertainment will start pre-sale of limited edition and regular edition of Stray Kids’ new album ‘MAXIDENT’ at domestic and overseas sales offices sequentially from today (6th) at 12 pm.Return to Sohu, see more