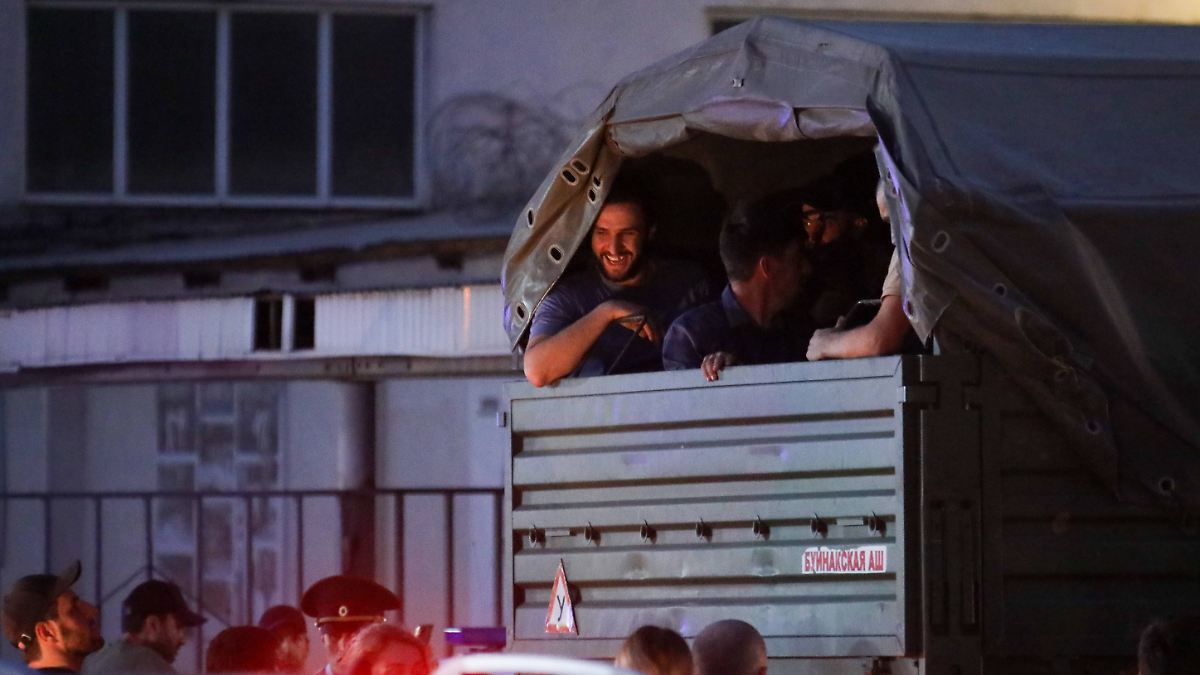 Russian mobilization is underway. In the West, there are doubts about the quality of the future fighters. The Kremlin downplays the number of fleeing Russians before being drafted. The foreign ministers of the warring parties meet in the UN Security Council and the Union submits an application for the delivery of tanks in the Bundestag. The 211th. War day at a glance:

The debate about Russian mobilization has pushed the fighting in Ukraine into the background, but fighting is still going on. In the eastern Ukrainian separatist stronghold of Donetsk, at least six people were killed by artillery fire. Six others were injured, said the head of the Donetsk city administration, Alexei Kulemsin, on Telegram. The 48-year-old blames the Ukrainian army for the shelling. The Ukrainian governor of the region, Oleksandr Starukh, in turn accuses the Russian military on Telegram of shelling the city of Zaporizhia. However, he does not provide any information on damage or victims. In addition, the Ukrainian military claims to have shot down two unmanned Russian drones and a Mi-24 attack helicopter near the city of Kostromka. Kostromka is in the Cherson region, where Ukrainian troops recently launched a counteroffensive.

Russia is said to have called up those arrested

The day after the announced partial mobilization, it continues to be the central theme surrounding the Russian invasion of Ukraine. The evening before, people in numerous Russian cities took to the streets against the drafting of young men. There are more than a thousand arrests. According to some civil rights activists, some of those arrested received their draft papers at the police station.

Americans and British doubt the quality of the reservists

In the West there are serious doubts about the effectiveness of the reservists called up by Russia. “Russia will probably have to contend with logistical and administrative challenges even just to muster the 300,000 soldiers,” said the British Ministry of Defense, citing intelligence findings. However, the newly raised troops were “probably not able to fight for months”. The US think tank Institute for the Study of War sounds similar. There it says that there are conflicting reports about how well the Russian reservists are being prepared for their deployment as part of the partial mobilization. It is assumed that many are generally poorly educated and have not received any refresher training.

Russia could call up a million fighters

However, there are also doubts about the number of reservists mentioned. The Internet portal of the newspaper “Novaya Gazeta”, which has since been discontinued in Russia, writes that President Vladimir Putin has given the Defense Ministry a free hand to mobilize up to a million men. This is in point 7 of Putin’s decree on Wednesday. This item was missing from the publication and was classified as “For official use only”. In its report, the newspaper, which operates from exile, referred to alleged sources in the Russian presidential office. The Kremlin promptly denied the report. Kremlin spokesman Dmitry Peskov spoke of a lie, as reported by Russian agencies.

There is also disagreement about whether many people left Russia, or at least tried to, or not. The Russian Presidential Office has described reports of Russian men leaving the country en masse after the partial mobilization as exaggerated. Already the day before there were numerous reports of Russians trying to leave the country by plane or car. Desired destinations are therefore Turkey, Finland and some former Soviet republics, for which no visa is required. Border traffic in south-east Finland has increased and was busier than usual, said the border guard in the region. According to the head of international affairs at the Finnish border guard, Matti Pitkäniitty, a total of 4,824 Russians crossed the border on Wednesday. On the same day last week it was 3133. The border guard had previously denied reports from social media that spoke of 35 kilometers of traffic jams in front of the Russian-Finnish border.

The EU Commission is struggling to find a common position among the member states on the issue of Russians wanting to leave the country. However, Commission spokesman Peter Stano said that EU countries must decide on entry applications from Russians on a case-by-case basis, taking into account fundamental rights and the right to asylum. Noting reports of rising departures, Stano said half a million Russians have fled their homes since the Russian invasion began in February. Czech Foreign Minister Jan Lipavsky has already rejected the request. Anyone who does not want to fulfill their obligations towards their own state does not yet meet the conditions for issuing a humanitarian visa. The Finnish head of government, Sanna Marin, also made skeptical statements. “The government’s will is very clear, we believe that Russian tourism must be stopped, as well as transit through Finland,” she said. Your country is considering entry restrictions for Russian citizens.

Oil and diamonds could be sanctioned

Further sanctions against Russia as a result of the announced partial mobilization are also being prepared at European level. The foreign ministers of the 27 EU member states agreed on this at an informal meeting on the fringes of the UN conference of heads of state and government in New York. “We will examine new restrictive measures, we will adopt them,” EU foreign policy chief Josep Borrell told journalists after the meeting. The sanctions could Price cap for Russian oil include. A diamond embargo is also under discussion, as Brussels diplomats have confirmed. However, Hungary remains the greatest source of uncertainty: According to a media report, Prime Minister Viktor Orban is calling for all EU sanctions against Russia to be lifted by the end of the year.

Lavrov and Kuleba duel in the UN Security Council

Elsewhere there was talk not only about Russia, but with the country: in the UN Security Council. However, this turned out to be a little different than expected. Russian Foreign Minister Sergey Lavrov was initially late for his speech. He then made serious allegations against Ukraine, accusing the West of interfering directly in the war by supplying arms and other support to Kyiv. Immediately after his speech, the Russian foreign minister disappeared again and let his deputy, Sergei Vershinin, represent him for the rest of the time. This earned him ridicule from his Ukrainian counterpart Dmytro Kuleba: “I also noticed today that Russian diplomats are fleeing just like Russian soldiers.” He accused Moscow of serious war crimes and warned that Russia could not win the war. The chief diplomats of the USA, Germany and other western countries made similar statements. The Ukrainian and Russian foreign ministers met for the first time since the beginning of the war in the most powerful UN body in New York.

Elsewhere, too, attempts are being made to bring the two warring parties to the table. According to director Rafael Grossi, the International Atomic Energy Agency (IAEA) has started “real negotiations” with Russia and Ukraine on the establishment of a protection zone for the embattled Zaporizhia nuclear power plant. Grossi told journalists in New York that he had met with both foreign ministers on the fringes of the general debate at the UN General Assembly. “The wheels are in motion.”

Germany also continues to struggle with the economic consequences of the Russian invasion. After the most important German gas importer Uniper was nationalized, Securing Energy for Europe (SEFE) – formerly Gazprom Germania – is now also to be transferred to state ownership. The Berlin gas importer is a Gazprom subsidiary and is already under federal trusteeship.

In the dispute over tank deliveries to Ukraine, the Union is increasing the pressure on Chancellor Olaf Scholz after Russia’s partial mobilization. The CDU and CSU are hoping for support from the ranks of the traffic light coalition with their Bundestag application for the delivery of battle tanks and armored personnel carriers. But Scholz and Federal Defense Minister Christine Lambrecht made it clear that they want to stick to the previous line when it comes to the delivery of heavy weapons. It remains the case that Germany is “not going it alone” on the tank issue, Chancellor Scholz said the day before. The German government regularly points out that no NATO ally has yet delivered modern Western tanks to Ukraine. In “RTL Direkt” contradicted Green politician Anton Hofreiter in the evening. The traffic light government’s argument that there should be no going it alone is not correct: “Stoltenberg has spoken, the US ambassador has spoken.”

More texts on the Ukraine war:

All further developments you can in our live ticker read.

neonatal treatment to prevent the disease?