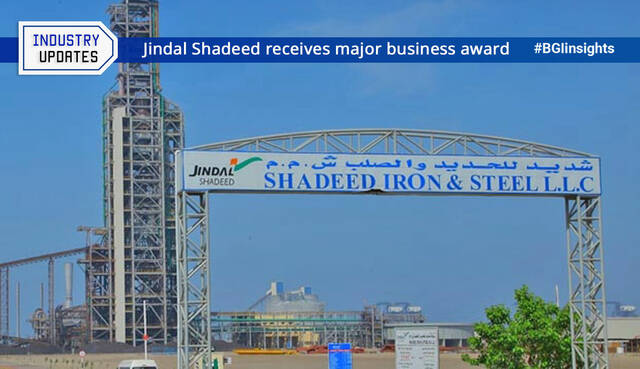 Mahmoud Jamal – Mubasher: Harsha Shetty, CEO of Jindal Shadeed Iron and Steel Company, the largest manufacturer and producer of iron and steel in the Sultanate of Oman, said that there is interest in expanding its investments in four Arab countries, led by Saudi Arabia and the UAE, in addition to Egypt and Bahrain.

pointed out in Remarks to reporters، The company is looking to enter markets with higher demand than competitors in the Middle East region to enter as iron and steel suppliers. He explained that the company was a strong support in the transformation of the Sultanate from a producer of iron and steel to a source.

He stressed that the company is currently interested in green transformation in the iron and steel industry in accordance with the directives of governments in the Middle East, foremost of which, of course, is the Sultanate of Oman.

Within one year of the launch of its brand “Jindal Panther”, it was able to obtain the largest share of the local market internally and in the UAE in the Gulf.

The company has contributed significantly to reducing the Sultanate’s dependence on importing construction steel. There are other products manufactured by the company, such as special sheets and pipes, which are exported to Europe, Saudi Arabia, Indonesia, Egypt, Ethiopia and Pakistan.

In line with Oman’s vision to reduce the country’s dependence on the oil and gas sector, Jindal Shadid has become a key partner in this endeavor and is committed to steel production.

With the current annual steel production capacity of 2.4 million tons, since 2010, Jindal Shadeed Steel has been considered the reliable supplier of steel products to the fast growing economies of Oman, UAE and Saudi Arabia.

Outside the GCC, Jindal Shadid supplies steel products to customers in other parts of the world including Europe, the Far East, China, Canada and Australia.

What new rules apply to pensioners

Ubisoft confirms release of ‘The Settler: A New Alliance’ on February 17, 2023 > News