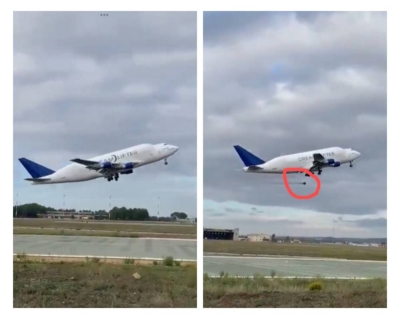 Al-Marsad Newspaper: A video clip documented the moment the tire of one of the largest aircraft in the world, “747 Dreamlifter”, which is designated for transporting aircraft spare parts, fell.

The plane took off this morning from Taranto – Grottaglie airport in Italy and one of its tires fell to the ground, the video clip showed.

Despite the fall of the tire, the plane completed its journey until it landed safely minutes ago at Charleston Airport in the United States of America.

747 Dreamlifter operated by Atlas Air loses a main gear wheel on departure from Taranto-Grottaglie Airport in Italy. The aircraft is still in the air enroute to Charleston Airport in the U.S. https://t.co/0xugG9gbh5

Warriors Green beat Poole to surprise fans in the American basketball world: the basic operation of the sixth? _training_video_season