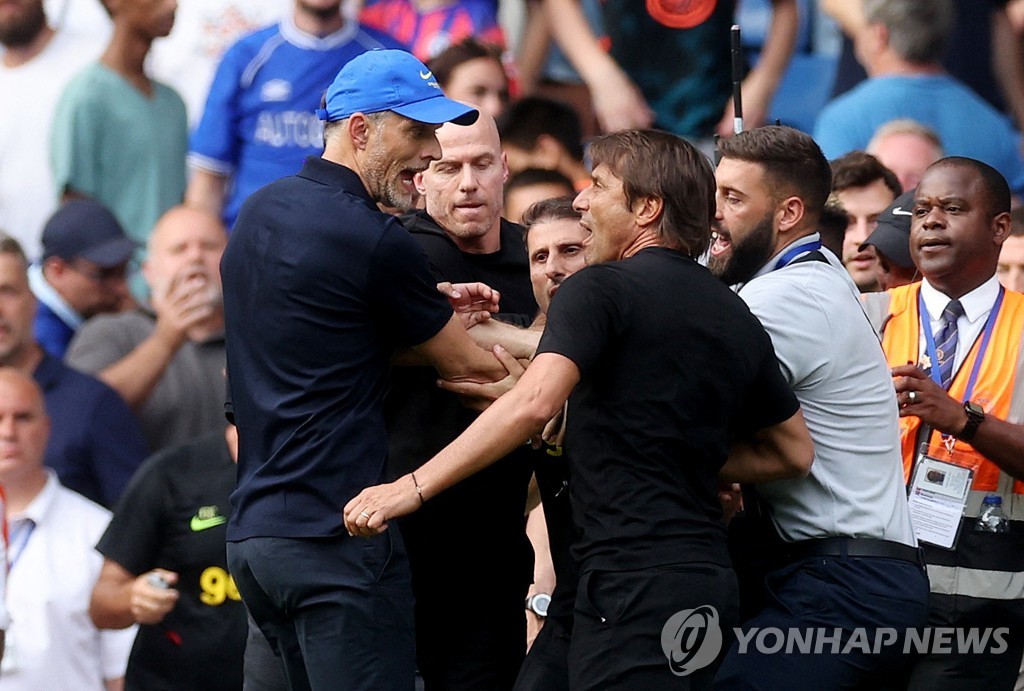 After exchanging the ‘ceremonial provocation’ and shaking hands after the end, emotions explode until you leave

(Seoul = Yonhap News) Reporter Choi Song-ah = The first match of the season between Chelsea and Tottenham in the English Premier League (EPL) was covered by the issue of a clash between the coaches of the two teams.

Chelsea and Tottenham drew 2-2 in the second round of the 2022-2023 EPL held at Stamford Bridge in London, England on the 15th (Korean time).

Chelsea took the lead 1-0 and 2-1, but Tottenham continued to equalize and in the end the points were divided by one.

Tottenham Hotspur, who had been weak in the first match of the new season, having suffered four consecutive defeats against Chelsea last season, was a dramatic aspect to secure a ‘victory draw’ with Harry Kane’s equalization goal in the second half in extra time. ‘ was.

Chelsea’s Thomas Tuchel and Tottenham’s Antonio Conte were in direct conflict with each other, not only in a “witness battle” but also in expressing emotions.

In the 23rd minute of the second half, Tottenham’s Pierre-Emil Hoybjerg scored a 1-1 balancing goal.

At this goal, coach Conte clenched his fists and roared toward the Chelsea bench, and opened a passionate ceremony, and coach Tuchel approached with a furious reaction and bumped his chest, shaking the benches of both teams once.

Then, in the 32nd minute of the second half, when Chelsea took a 2-1 lead with a goal from Rhys James, coach Tuchel responded.

He expressed his joy with the ‘sprint’ that went all the way to the side where Conte was standing, and even added an uppercut.

When coach Tuchel did not let go of Conte’s hand during the manager’s handshake at the end of the game, the two exploded in anger towards each other, and members of both teams gathered and tangled as they approached the brink of a fight.

In the end, the situation came to an end after a red card was issued to both coaches.

After the match, coach Tuchel strongly expressed dissatisfaction with the referee’s decision.

“Both Tottenham’s goals are unacceptable,” Tuchel said in an interview with Sky Sports. “Only one team deserves to win, and that’s us.”

“There was an obvious foul on Kai Havertz in the build-up situation (Tottenham’s first goal). James was cautioned for one tactical offense, but I don’t know how many (Tottenham’s) Hoyvier or Rodrigo Bentancourt fouls. “He said.

He pointed out the situation in which Bentancourt tackled Havertz right before Hoybjerg’s first equalization goal, and the situation was passed without the referee’s decision.

In the end, while coach Tuchel’s dissatisfaction was piling up with the decision, Conte’s first ceremony sparked a direct confrontation, and the situation continued.

When asked about the clash with coach Tuchel, Conte said, “It doesn’t matter. The most important thing is about football and the game.”

When asked about the referee’s decision, he said, “You know I don’t talk about referee verdicts. I will continue to do so.”

Watch .. With great regret, Suhair Ramzy reveals .. How the screen dungwan deceived her, Rushdi Abaza, and took from her everything he wanted in front of and behind the camera – hot details

The fruits that give flavor, smell and color