He woke up on price of dollar bluea fact that fueled fears among savers and ignited doubts as to whether or not the time had come to abandon the positions invested in time deposits and bonds in pesos to turn around and protect the surplus income in US currency.

It is that the informal bill was stuck for several weeks at a value close to $290, and suddenly on Tuesday it jumped above $300.

Now, there is a point that economists emphasize: reality indicates that the devaluation of the currency, both in the free and official markets, is around 3.5% throughout November. While the interest rate in pesos today is 6.25% per month, a figure similar to inflation.

And despite the escalation on Tuesday, In all markets, the dollar advances during 2022 around 56%. In other words, it is still behind with respect to the rise in prices of the Argentine economy, which in the first 10 months of the year accumulates a rise of 76.6%, according to the latest November data from INDEC. In fact, a traditional fixed term pays 75% per year (TNA).

“For a few months it has not been news that the blue dollar is cheap compared to the evolution of inflation. Now the currency has risen one more notch to $300 in the informal market, but it should be remembered that at today’s prices in July it exceeded the $350 At the time, it had skyrocketed in the midst of a difficult financial and political situation, but today the ingredients are given so that it begins to rise rapidly“, affirms iProfessional Isaiah MariniEconomist at Econviews.

About, Fernando Baereconomist at Daniel Marx’s Quantum consultancy, adds: “The truth is, it all depends on how far you think you can correct the value of the free dollar. If the depreciation were up to, let’s say, 6% per month, then it would be matching the interest rate in pesos.”

The interest rate in pesos, for now and despite the rise in the blue on Tuesday, continues to be more attractive.

Price of the dollar: alert for investments in pesos

The consensus of economists consulted by iProfessional is that the free dollar It has been at these stable price levels for many monthsTherefore, if it were adjusted for inflation, its value should be much higher.

In the meantime, Investments in pesos continue to show attractive levels, but concern is now centered around the significant amount of liabilities generated and what could happen in the coming months with a dollar that is falling further and further behind.

“The accumulation of pesos that has been generated byr Increase in the stock of fixed terms, Treasury debt position in national currency and the stability of the dollar that had been very persistent, makes us very cautious in terms of continuing to be positioned in pesos”, he details to this medium Paul Repettohead of research at Aurum.

From the opinion of Mauro Mazzaportfolio manager de Bull Market, “all are in fixed terms of the banks: savers, companies and even institutional, but investors today are not in CER, Bills or Badlar bonds. The problem is that if the blue dollar rises 15 to 20 pesos more, we will see many return to the stock market at the end of November and, therefore, a massive closing of fixed terms and the search for coverage in dollars to spend the summer “.

Beyond the exchange rate delay, Marini indicates that the first factor that influenced the increase in the price of the dollar is demand: with the World Cup and the arrival of the holidays“people begin to demand more currency, and for the informal this will be especially true considering that the ‘Qatar dollar’ is at $335”.

The account is simple tourists who travel abroad today should go to the blue to buy currency at $302, than to pay with a card about $30 more.

On the other hand, with the provision that allows access to the exchange rate of the MEP to foreign tourists, “the supply of blue will be reduced and with this its price will tend to rise”, warns Marini. 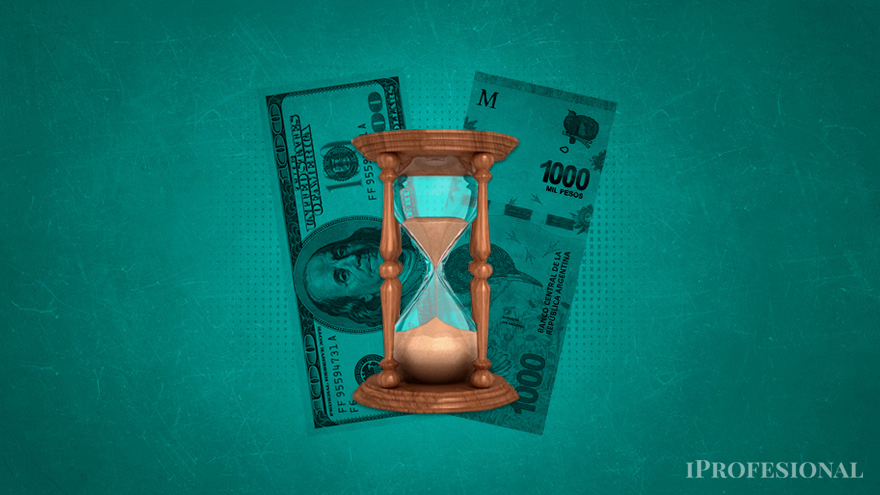 If the price of the dollar rises to $320 or more of that value, savers may become restless and begin to dollarize positions.

Dollar or pesos: what to invest in

When investing, the experts consulted by iProfessional assert that It is time to be cautious in investing in pesos and look at all positioning in dollarsthe one that follows inflation, or that replicates the prices of foreign paper.

“We estimate that in the current context, only those who cannot opt ​​for another type of positioning could continue betting on assets in pesos. In fact, without access to dollars, we prefer to position ourselves in energy stocks or corporate or sub-sovereign bonds that are paying dollars in the short term,” recommends Repetto.

Mazza, meanwhile, maintains that it is closing positions in bills and t+1 remunerated fixed-income funds, and beginning to buy, “without haste, instruments that replicate the MEP dollar. Let’s hope we are wrong because what we see in fixed terms we have never seen, “she warns.

It even details that it is possible that some savers prefer to buy CER debt for December, which is adjusted for inflation. In this case, he favors the Discount in pesos (DICP) and the Boncer issued in 2026 (TX26), which “work at 70% parity, almost discounting a reprofiling”.

And Mazza ends: “Our preferences are the same assets in dollars, negotiable obligations (ON), the Galileo Premium A fund and Cedears” of world leading stocks.

For his part, Baer recommends “be attentive”, since the yields of the Treasury debt in pesos are “interesting” considering expected inflation or devaluation for the coming months.

“For now I would hold the positions if I had them, although I would be cautious, would have a very active administration. I would move to the longer bonds, due to a risk issue and relative parities. Meanwhile, if I did not have titles in the portfolio that have already suffered the price falls of the last few weeks, I would not add papers in pesos to my portfolio at these cash value levels with liquidation. Although it would add titles in dollars,” sums up Baer.

Ultimately, Marini adds that the interest rate in pesos will continue to be almost neutral in real terms, “but I think that at current prices the dollar offers an interesting income opportunity.”